Song Seung-heon to Be on Fuji TV 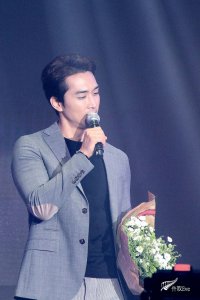 Japan's FujiTV is in the process of producing a special program on actor Song Seung-heon, one of the leading Korean Wave stars who will be discharged from military service on Nov. 15.

Mnet Media, Song's agency, said Thursday that the Japanese broadcasting company is working on the two-hour-long program with the working title of "Welcome Back, Song Seung-hun", which will air in mid-December.

The documentary program will show his life in the military and preview his Asian fan meeting to be held on Nov. 18 and 19. It will be aired three times through the TV's major programs, according to his agency.