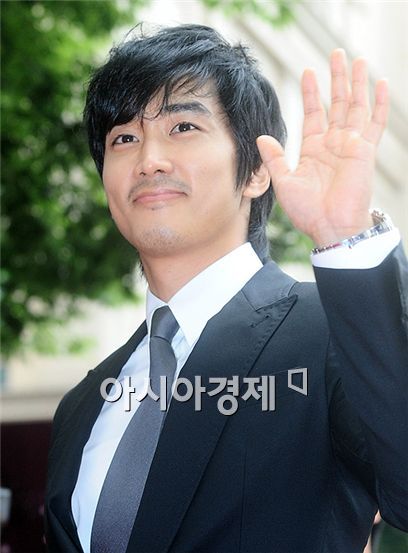 Korean actor Song Seung-heon will be making a comeback to the small screen in an upcoming television drama tentatively titled "My Princess", according to his agency Storm S Company on Thursday.

An official at Storm S said in a phone call with Asia Economic Daily today that the actor has been cast in the new series, written by noted television writer Kim Eun-sook who previously penned "Lovers in Paris" (SBS, 2004) and "On Air" (SBS, 2008).

"Casting for the drama will wrap up soon and go into shoot starting August", the official explained, adding that a director and broadcaster for the show has not been decided as of yet.

The actor is said to have expressed his anticipation for the show, remarking that he is "looking forward to this series because I'll get to show a different type of soft-guy image".

Considered one of the original heartthrobs in Korean show business, he has also appeared in several films, most notably the romantic comedy pic "The Guy Was Cool" in 2004.

"Princess" is reportedly aiming to go on air in the second half of 2010.

"Song Seung-heon to make small screen comeback this year"
by HanCinema is licensed under a Creative Commons Attribution-Share Alike 3.0 Unported License.
Based on a work from this source