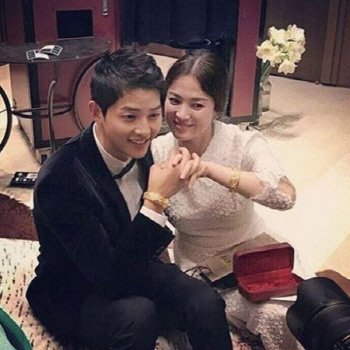 A new photo of Song Hye-kyo and Song Joong-ki wearing golden bracelets that seems to have been taken on their wedding day is circulating. Chinese media reported that these bracelets were a wedding gift from director John Woo and the picture went viral. However, there is another story behind the gifts.

Apparently, it was director Wong Kar Wai who gifted these golden gifts to the couple beause he couldn't attend the wedding. An unidentified person took a picture of them wearing their presents.

Wong Kar Wai couldn't be at the wedding but Jackie Peng, one of the producers of Song Hye-kyo's Chinese movie and manager to a couple of Chinese stars, delivered the present himself. Another Chinese media source at the wedding said the couple were happy to receive their gift and took a picture on the spot to send their gratitude to Wong Kar Wai.

Zhang Zi Yi, who was in the same movie as Song Hye-kyo, attended Song Hye-kyo and Song Joong-ki's wedding, too.

Meanwhile, Song Hye-kyo and Song Joong-ki got married on the 31st of October and left for Spain on their honeymoon. 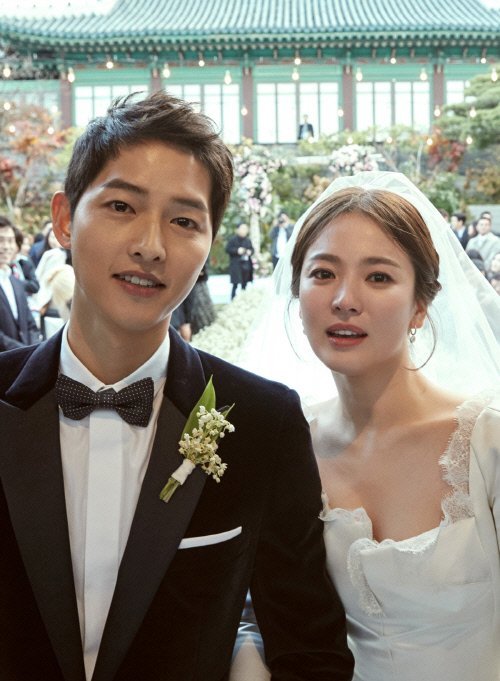 "Song-Song couple's golden bracelets from director Wong Kar Wai"
by HanCinema is licensed under a Creative Commons Attribution-Share Alike 3.0 Unported License.
Based on a work from this source