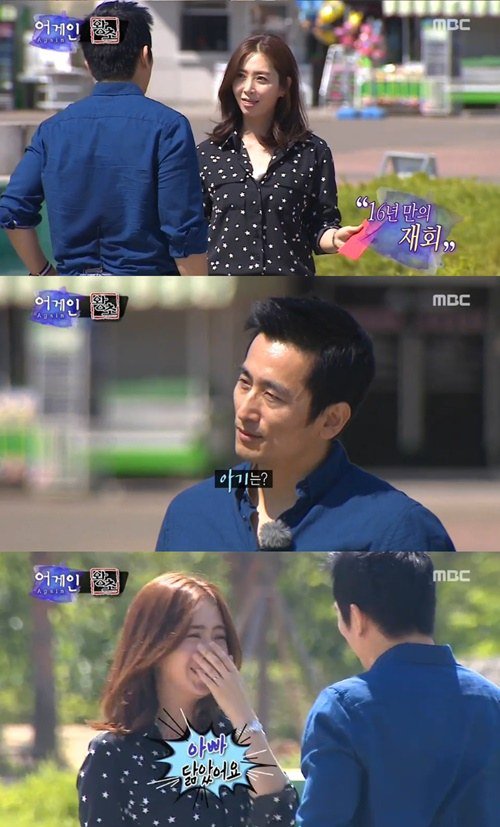 Actress Song Yoon-ah said her son looks like his dad.

She appeared in the MBC TV show "Again" and reunited with the cast of "Wangcho" from 16 years ago.

She met Cha In-pyo in the promised place. They were awkward and Song Yoon-ah said, "I knew you'd come. I became nervous as I came". Cha In-pyo said, "I told them I would like for you to come out. How are you still the same from 16 years ago?" Song Yoon-ah joked that she was old and he asked about her child. She answered, "He's 6-years-old and he looks like his father.

Cha In-pyo continued, "Song Yoon-ah was very pretty. She dazzled when she came to work".

Meanwhile, "Again" is a reunion pilot show. It delivers greetings to those celebrities who have no way of seeing each other because of their busy lives and helps them reunite.

The first episode chose Cha In-pyo, Song Yoon-ah, Kim Nam-joo, Kim Sang-kyung, Yoon Tae-young, Park Sang-myun and others from "Wangcho" in 1999. Everyone said 'yes' to the show and reunited for the first time in 16 years.

"Song Yoon-ah, "My 6-year-old son looks like Seol Kyeong-gu""
by HanCinema is licensed under a Creative Commons Attribution-Share Alike 3.0 Unported License.
Based on a work from this source