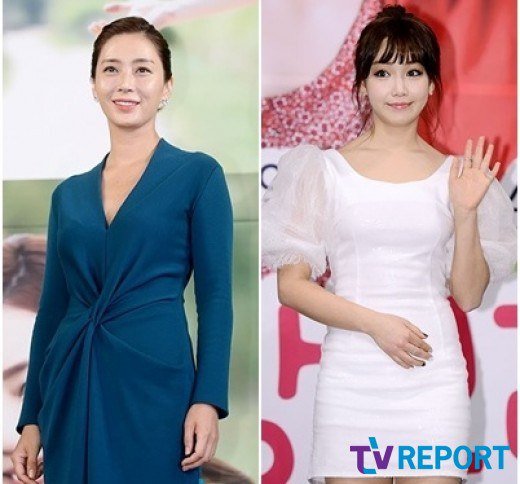 The 2014 MBC Drama Awards is happening Tuesday night in Korea. Everyone who starred in MBC dramas this year are going to be there and who will the viewers vote for?

The event is particularly special this year. Not only is the Grand Prize winner in the hands of the public but it seems like the winner will come from a weekend drama. The candidates haven't been up yet but Song Yoon-ah from "Mama - Nothing to Fear" and Lee Yu-ri from "Jang Bo-ri Is Here!" seem likely to be on the list. Song Yoon-ah starred as a mother and Lee Yu-ri starred as the evilest woman in the history of evil women.

Of course, it's too early to say anything. There is also Jang Hyuk who brought back MBC drama to life with his comical act in "Fated to Love You". He's the only man between the two women. Who is going to take home the Grand Prize?

Lee Yu-ri has been getting great reivews from Netizens. She could also say she's greedy for the Grand Prize because of this atmosphere.

Lee Yu-ri is responsible for making "Jang Bo-ri Is Here!" possible. She played Yeon Min-jeong, an evil minded woman who would do anything for success. Her poisonous expressions and words sliced through her opponents.

Yeon Min-jeong is the most evil woman of the century and it looks like things are going to stay that way for a while. It wouldn't have been possible without the outstanding performance by Lee Yu-ri.

However, things have not always been that great for Lee Yu-ri. She has a list of filmographies but she's never taken home the Grand Prize before. The fact that she's not the main character of the drama and the heat for the drama has died down a little could also affect her chances of winning.

Song Yoon-ah – Is she aiming for the Grand Prize?

Song Yoon-ah from "Mama - Nothing to Fear" is a very likely candidate. She played Han Seung-hee, a single mom who was given only a short time to live.

Song Yoon-ah successfully brought the character to life. It was more realistic because her act of sadness was contained and didn't involve any exaggeration.

This was her first come back to drama in 6 years and she was reviewed again as an actress. She managed to appeal to the public once again. It looks like she's going to have a second peak moment of her life if she takes home the Grand Prize.

However, Song Yoon-ah's performance was great but the votes are based on the public so it's hard to tell.

Jang Hyuk – Will the only standing male bring a twist of events?

We can't leave out Jang Hyuk. He was the only guy in list of candidates and Shin Ha-kyun could be a likely rival but still, he's in the lead. Shin Ha-kyun's "Mr. Back" hasn't been doing too well in the second half.

Jang Hyuk succeeded in being funny and romantic at the same time in "Fated to Love You". He was a third generation plutocrat who is clumsy and sly.

He was also sincere. He pulled of various faces in one drama and proved his talent. He reunited with Jang Nara for the first time in 10 years and that resulted in good reviews about the couple.