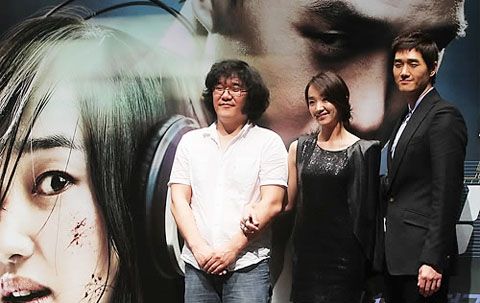 "I had been worried about filming the scene where I had to curse and speak harsh words, but actually, I felt relieved because I could criticize Han Dong Soo, who distressed me in the movie". -Soo Ae

The production presentation for the thriller movie "Midnight FM", in which actors Soo Ae and Yoo Ji-tae appear as the protagonists, was held at the Lotte Cinema's Kunkook University branch located in Jayangdong on September 15.

The movie tells the story about what happened to the radio DJ named Sun Young (Soo Ae), who had left only one broadcasting schedule before she quit, when she received a phone call from an unidentified radio listener named Dong Soo (Yoo Ji-tae).

When Sun Young hosted the live radio program, she received a phone call from Dong Soo, who threatened her by saying he would kill her family unless she did what he ordered her to do. And she ended up fighting desperately against him to save her family.

Soo Ae, who used to play mostly naïve and feminine characters so far, had changed her acting by taking a role of a character who confronts a killer, and Yoo Ji-tae challenged himself again by playing a villain again after he had played a villain in the movie "Old Boy".

Yoo Ji-tae said, "Two characters, Lee Woo Jin in the movie "Old Boy" and Han Dong Soo in the movie 'Midnight FM' contradicted themselves, but the origin of their evil are totally different. Playing Han Dong Soo was much more difficult".

Soo Ae reportedly attended classes for announcers to prepare for her role as the radio DJ. She said, "I have always wanted to become a radio DJ, and I was very happy while filming because I could experience the job of announcer even for a short while".

Being asked about what kind of radio program they would like to host if they could become a radio DJ, both actors replied they wanted to introduce soundtracks.

In particular, Soo Ae said, "My voice sounds like a lullaby during the daytime, so I want to interact with listeners in a friendly manner at midnight".

The movie is the second work by director Kim Sang-man, who directed the movie "Girl Scout". Kim said, "I had chosen this movie because I wanted to produce a movie in a genre that is filled with tension and suspense during the running time".

He had taken part in managing the various elements of movie, such as art and music, before he began directing movies. He added, "I think that I might be able to present special elements that could be differentiated in terms of music and the artistic setting of the closed space".
_____________________
Soo Ae smiles. Actress Soo Ae answers questions at the presentation for the movie "Midnight FM" (directed by Kim Sang-man) held at the Lotte Cinema on the morning on September 15.