Soo Ae Admits to Passing Out in Film 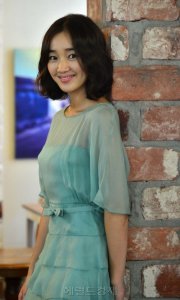 Soo Ae admitted in an interview with Yonhap News that had actually gotten drunk and blacked out for a scene. It was for a scene in her new film "Sunny", which takes place at a nightclub in a U.S. army base, where she drinks heavily and passes out in the bathroom. She revealed that she really drank more than half a bottle of whisky at the director's criticism that she didn't look real enough. As a result of drinking so much alcohol, she became really drunk, adding reality to the scene where she throws up in the toilet and blacks out. Soo Ae had won admiration from the director and the rest of the filming crew for her commitment to the film.

Due for release on July 24, "Sunny" is a story of naïve country girl named Sun-I, who goes to war-torn Vietnam during the 1970s to search for her husband. Soo Ae has been applauded by film critics that she has played the role of Sunny to perfection, showing Sunny's seamless transformation from an innocent and frail girl to strong and determined woman.

"Sunny" is also director Lee Jun-ik's first film to be shot abroad. Director Lee is known for highly acclaimed films "The King and the Clown" and "Radio Star".