"Soo-mi's Dishes" Key, grandma's food in the fridge for 4 years 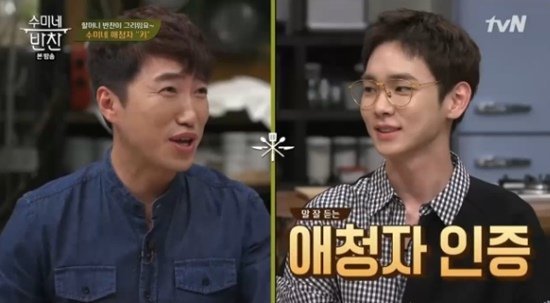 Key expressed his fondness for the show "Soo-mi's Dishes".

SHINee Key appeared on tvN's "Soo-mi's Dishes" as a guest.

Kim Soo-mi said, "I heard you were coming out here so I watched your videos. Your name is Key. I used an old word for Key once when I was young and all my friends teased me".

Key said he loved watching the show and that he plays it every time he eats. He said, "My grandmother raised me and whenever she made me something, she never explained to me what it was. There's one thing that she made me and I could never make it on my own because I didn't know how but you made it on TV and I could try it on my own".

"I can 'feel' the taste when I watch this show. It's such a grateful program for me".

"It's been 4 years since my grandmother passed away but I still haven't thrown away the food she made for me. I can't eat them now but I can't throw them away either".

""Soo-mi's Dishes" Key, grandma's food in the fridge for 4 years "
by HanCinema is licensed under a Creative Commons Attribution-Share Alike 3.0 Unported License.
Based on a work from this source