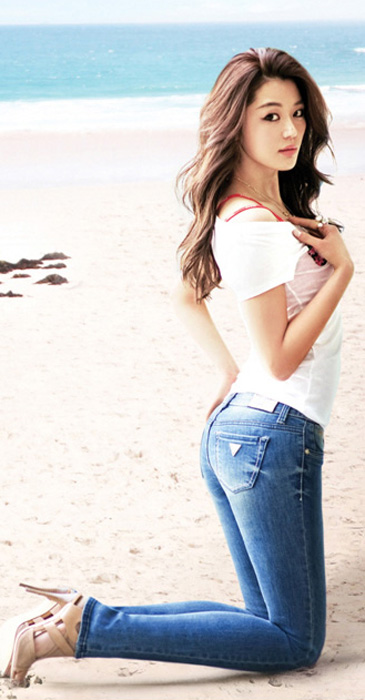 South Korean actress and model Jun Ji-hyun appears as the official model for Guess Korea brand's "2011 Spring/Summer" event "Guess Is Back" in a Seoul event.

Hyb (Jeon) was born in Seoul, South Korea, and studied in the Department of Theater and Film at Dongguk University. She began her career as a fashion model for Echo Magazine in 1997 at the age of 16.

After appearing in a number of TV sitcoms, her movie debut came in "White Valentine" (1999). This was followed by a role in Il Mare (2000), which proved to be a success. An American remake of "Il Mare", The Lake House, was released 14 June 2006. However, her biggest breakthrough was in "My Sassy Girl" (2001), a romantic comedy which bought her international recognition, and won her a Best Actress award at the Daejong Film Festival in 2002. In 2004, she starred in the film "Windstruck", a South Korean fantasy-romantic comedy which was directed by kwak Jae-Yong. The film was also another major success and was the 8th-highest grossing Korean film of 2004. In 2006, she was also in the movie "Daisy". In 2008, she was also in the film "A Man Who Was Superman".

Jun Ji-hyun worked closely with CJ Entertainment, particularly with the distribution of "Windstruck", "The Uninvited", and "A Man Who Was Superman".

In 2009, she made her English-language film debut when she starred as Saya in "Blood: The Last Vampire", which was filmed in China and Argentina in March 2007. It was during filming and before the March 2009 release that she adopted the Westernised name Gianna Jun. The film was Jeon's first official action film and was a "drastic" change in her image from previous films.

Jeon will be returning to the big screen in 2011 in Wayne Wang's film adaptation of Lisa See's novel "Snow Flower and the Secret Fan". Filming in Shanghai, China began in February 2010.