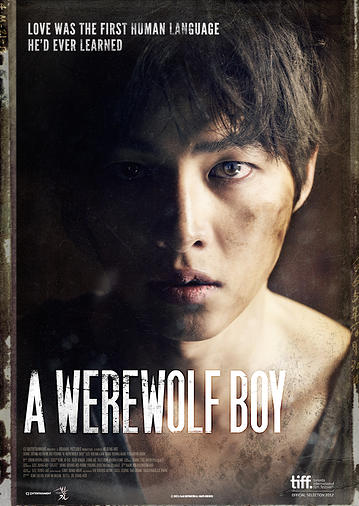 "A Werewolf Boy" grabs #1 at Korean box office on opening night and logs 1.3 million admissions over the first weekend!

South Korean theaters scared up more than candy and costumes on October 31st – a supernatural buzz filled the air as audiences were enchanted by "A Werewolf Boy", CJ Entertainment's fantasy romance starring up-and-coming stars Song Joong-ki and Park Bo-young. The film ranked #1 on various movie ranking websites even prior to its release and reigned first place in the box office on opening day, defeating Skyfall, the latest movie in the legendary James Bond series. On November 5th, the Korean Film Council reported that in its first week, "A Werewolf Boy" surpassed 1.3 million in box office admissions.

He was a creature that was never meant to exist.
Summoned by an unexpected phone call, an elderly woman visits the country cottage she lived in as a child. Memories of a boy she knew 60 years ago come flooding back to her. Then young Suni and her family moved to a small village in Korea. There, they encounter a bedraggled orphan boy hiding under a bush and take him in out of pity. Called a "wolf boy" by some for his feral behavior and uncommon strength, Suni teaches the boy how to eat at a table, and read and write so that he might one day live among people. He repays her kindness with a devotion unequalled by any human being, a love that exceeds all normal expectations. Then one day a threat to Suni exposes the boy's deadly bestial instincts, and in an instant he becomes the subject of the villagers' fears. In order to save the boy's life, Suni must abandon him while promising, "Wait for me. I'll come back for you".

"South Korean fantasy romance "A Werewolf Boy" dominates at box office!"
by HanCinema is licensed under a Creative Commons Attribution-Share Alike 3.0 Unported License.
Based on a work from this source