[special article] He's in the Army now, but not out of sight: Rain's commercial ads & projects shine on. 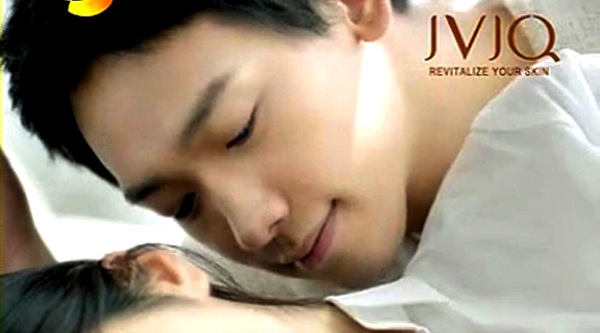 Earlier this month, on February 11, South Korean singer, actor, and mega-entertainer Rain (a.k.a. ROK Army Private First Class JiHoon Jung) completed four months of service in the Republic of Korea military. In those four months, he has established himself as a serious super soldier at one of the toughest training camps (near the DMZ), as more physically fit than recruits ten years his junior, and as a loyal squadron leader and top sharpshooter of the 5th Division. No one can say he has used his celebrity and taken the easy road when it comes to doing his duty for his country.

Rain has never taken the easy road at anything. He's always taken the one he knew was right, worked very hard, and weathered whatever storm it may have entailed.

According to the Defense Ministry, the latest on Private FC JiHoon is that, after earning a spot as an Assistant Training Officer back in mid-December (with his excellent marksmanship and superior physical accomplishments during basic training), he is now being transferred from the Infantry to the Defense Media Agency and will serve the remainder of his compulsory duty as a PR agent. 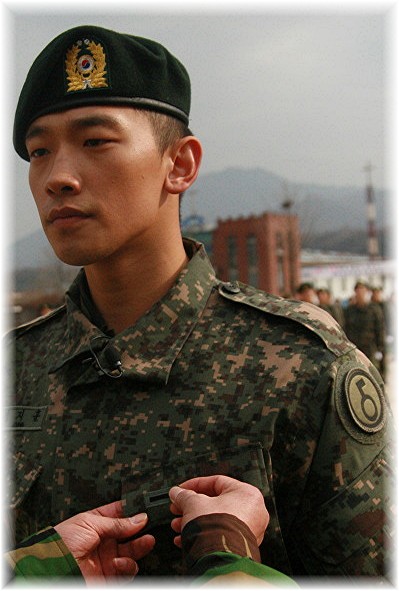 Although he'd wanted to serve his entire two years as an Ordinary Joe, this is a good thing for several reasons. First, Rain's God-given stage talents won't have a chance to get rusty (as if that could ever really happen!). Second, with Shinhwa's Andy Lee and actor Lee Joon-gi recently discharged, and actor Kim Ji-suk, actor Lee Dong-gun, and actor Lee Wan approaching their discharge dates, the DEMA was about to be pretty short of capable acting recruits for radio, TV, and live programing and events for the troops. So, Rain handing in an application along with singer Kim SungWon, actor Kim Jae-wook, and actor Lim Ju-hwan - and the four of them being chosen for the job-makes perfect sense.

Rain can instill morale with the best of them. Just ask the soldiers he's been serving with for the past four months. And he had to have felt bad at the possibility that some DEMA programs might be shut down without the proper entertainment help. Of course, he would decide to go where he was needed the most.

For his fans, it seems like forever since he enlisted at the Uijeongbu 306 Reserve Troops Station on October 11, 2011. The time is passing terribly slowly towards his July 2013 discharge date, but there are bright spots that continue to shine in Rain's temporary absence. Those bright spots are the projects he did in advance.

You see, Rain is a very smart cookie. So in addition to using the bulk of 2011 to bid us a fond farewell with his The BEST Rain Asia concert tour, Rain The Best Show Korea national tour, his live charity concerts for Japan, and Last of The Best free street concert in Kangnam-gu, as well as completing filming for his upcoming Korean summer blockbuster movie 비상 [飛上]: 태양가까이 ("Soar into the Sun"), the man bulked up on new sponsors in a major way. Which wasn't very hard to do, seeing as companies were practically beating his door down for a shot at pairing his name and face-and body-with their product. And who could blame them? 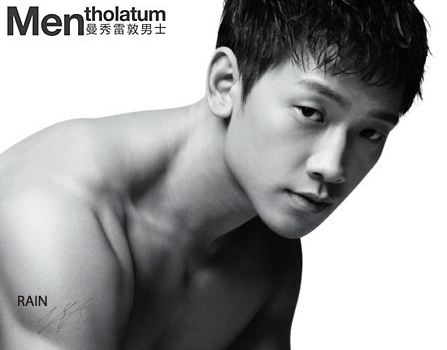 From the time of his April 2002 career debut to the present, Rain has been a successful brand ambassador and model for top fashion, electronics, media corporations, and consumer products galore, in Korea and across Asia. CJ One, Nikon, Hyundai, KB Bank, LG, Pizza Hut, Pepsi, Samsung, Pantech, Clinic Clear, The City of Seoul, BMW, and AFLAC are only a few.

He has been a fashion plate for Louis Vuitton, Calvin Klein, Giordano, DOHC, André Kim, Jeremy Scott, and a slew of other designers. He has graced the covers of Esquire, Men's Uno, Harper's Bazaar, Cosmopolitan, ELLE, MovieWeek, Filmax, Kung-Fu, and well over one hundred other magazines, several times over. Photographers have said that when it comes to photo shoots, Rain always gives them exactly what they need. They never come away from a project lacking.

To name all of his affiliations would make this article more than a mile long. So we'll only mention some of them here, starting with his current product sponsors.

MENtholatum Skincare for Men (China). Rain also signed with Mentholatum China in March 2011, and before we knew it, the OcHyPo campaign (Oil. Control /Hydration /Power.UP) came out of the gate sizzling.

Haechandle (해찬들). Under parental giant and longtime sponsor CJ E&M. Any problem can be solved with red pepper paste!

Coupang (쿠팡) . South Korean social commerce firm Coupang is a massive buying service, one of Korea's largest, that offers just about anything a consumer would want to purchase, but at amazingly exclusive discounts daily. The CFs, starring Rain and Kim Tae-hee, hit the scene almost a full month after Rain's enlistment.

Adidas. Adidas went all in with Rain around the spring of 2011, and it was impressive indeed. Here are Rain and actor Yoo Seung-ho ruling the winter and bringing the heat.

The Span of His Career

Luxury leather goods brand MCM was smart enough to jump onto the Rain train around 2009, and has been on board since. Renowned jeweler and watch manufacturer Cartier is another luxury brand that benefited from Rain as its spokesmodel, in 2010. One-stop shopping and hotel conglomerate Lotte Duty Free and Rain have had a most fruitful relationship that we've watched grow for years. 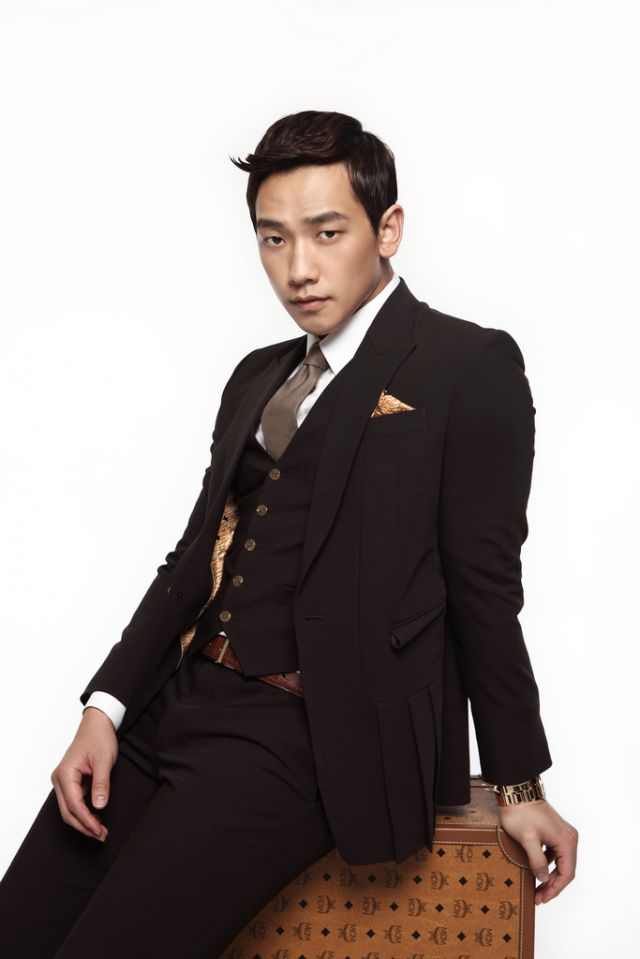 For the two years that Rain was the face of the "back to nature" skincare line Nature Republic (March 2009 to March 2011), some of the most amazingly beautiful ads and commercial spots filmed on location in Australia and Jeju Island graced television, the Internet, and shops all over the world.

One of the longest affiliations Rain has had is with wireless telecommunications corporation SK Telecom. Their relationship has spanned the whole of his career, with one of the earliest commercials showing Rain dancing on the side of a very busy street in polka-dotted pants in 2002, and the latest one (shown below) filmed during the wee morning hours in the summer of 2010 in Yokohama, Japan.

For all the billions of won (₩, KRW) in phone sales racked up during Rain's reign, he should have free phone service for life, we say.

Waiting for Rain, with Rain

Even with world star Rain in the military for the next seventeen months, his fans are as active as ever and haven't slowed their support of him.

His official fan club The Cloud, based in South Korea, has become quite diverse with thousands of members in Korea, Japan, China, the U.S.A., Puerto Rico, Hong Kong, Taiwan, Malaysia, Canada, the U.K., Mexico, the Philippines, Argentina, the United Arab Emirates, Peru, Singapore, Ecuador, Chile, Argentina, Denmark, Germany, Indonesia, Macao, Thailand, Vietnam, and Italy. Beyond The Cloud, Rain's extended nation of fans touches every continent, hundreds of countries, and isles in between-Micronesia, Malta, and the Faroe Islands, to name a few-and includes men, women, and children from every walk of life. 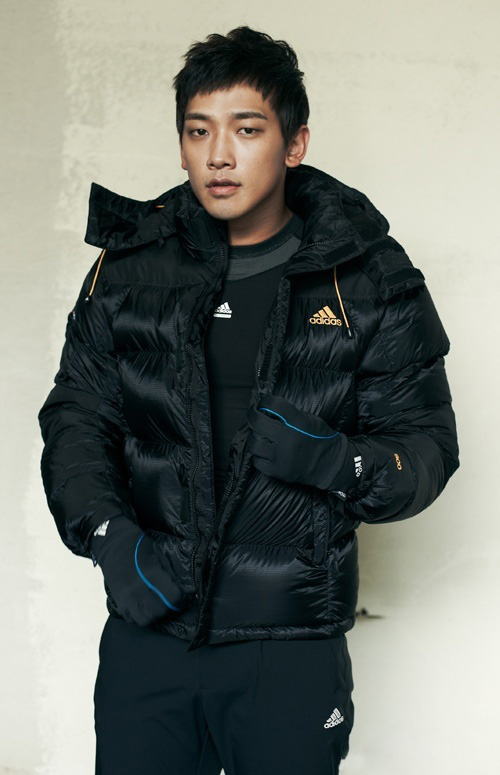 The great thing is that this passionate fan base doesn't have to wither and go completely dry from lack of Rain as it waits for the man to return to civilian life. Thanks to the projects he left in his stead, every now and then, something new not yet seen pops up and surprises us. That is so like JiHoon Jung-always thinking ahead, always planning for the care and feeding of his family, dependents, fans, and career.

As Hollywood actor and Speed Racer star John Goodman told the Media about his South Korean cast mate in 2008, "He's so talented and he works so hard… He's like the hardest working man in show business…"

We have Rain's past and present endeavors to back that up.