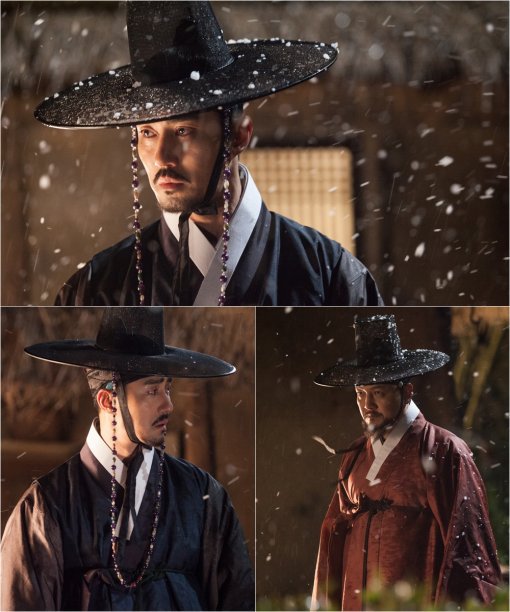 Stills of Cha Seung-won and Jung Woong-in exchanging deathly looks have been released by the new MBC drama "Splendid Politics".

"Splendid Politics" is a historical drama about the passion and jealousy of humans through people from the Joseon political times. Cha Seung-won plays Gwang Hae-goon, a cold but elegant leader and Jung Woong-in plays Lee Lee-chom, who helps Gwang Hae-goon become king and then becomes a very influential person in the Gwang Hae-goon regime.

Cha Seung-won's eyes told his emotional status. He seemed agonized at one point and then cold the next. He looks said in one still of him looking back somewhere.

Jung Woong-in is looking suspiciously at Cha Seung-won with the coldest of expressions on his face. Their charisma sweeps the whole set in intense fashion and it's raising expectations for the drama.

The stills were taken on the 28th last month. To create a scary and cold looking background, 4 power blasting fans were added to the set and it took a hundred or so staff to film the scene for 5 hours. Although it must've been tough to keep their eyes open at such wind, Cha Seung-won and Jung Woong-in created the perfect scene.

After the first shoot, Cha Seung-won said, "I'm nervous but excited about the adventure that I'm about to take. I think this will be an impressive drama". Jung Woong-in said, "I am happy to have met such people to work with. I want this to remain in my memories forever".

The production of the drama said, "Cha Seung-won and Jung Woong-in have been perfect so far. We have the greatest scene ever thanks to their hard work".

""Splendid Politics" Cha Seung-won VS Jung Woong-in"
by HanCinema is licensed under a Creative Commons Attribution-Share Alike 3.0 Unported License.
Based on a work from this source