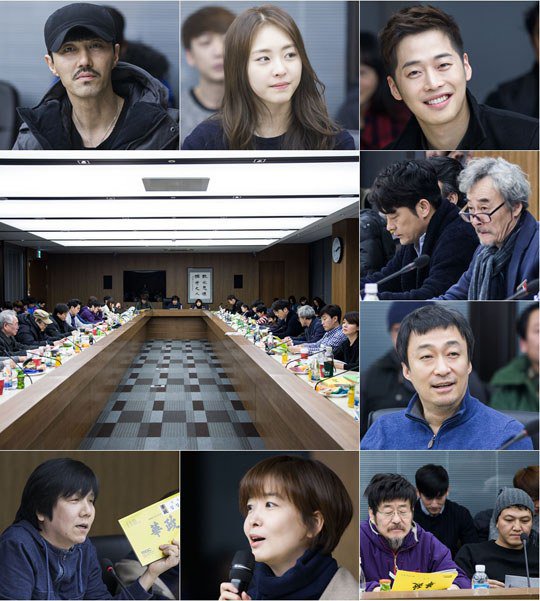 National actors and actresses gathered for a script reading session.

As much as "Splendid Politics" is known for its outstanding cast, the fact that everyone gathered in one place alone was a sight to see. Director Kim Sang-ho-I said, "I have worked on various dramas but none with a sight like this".

He added, "I think it's a blessing to have met everyone once again for the first time, including writer Kim In-yeong. I hope to create something that will always be remembered after time".

"Splendid Politics" writer Kim I-yeong also said, "Thank you for deciding to ride along this long journey and I thank the staff who are always hard at work".

The script reading this day went on for four hours. Despite the fact that it was only the first script reading, everyone did the best of their abilities and heated up the atmosphere. Cha Seung-won, in the role of Gwang Hae, went back and forth between the human Gwang Hae and the cold blooded leader.

Park Young-gyu in the role of Seon Jo showed charisma with just one line and overwhelmed the entire place. Kim Chang-wan, Jo Sung-ha, Uhm Hyo-sup, Lee Sung-min and Yoo Seung-mok also came prepared and didn't fail to impress. Jung Woong-in and Kim Yeo-jin who are the bad guys in the drama, caused intensity in the room with every word they spoke.

The younger cast who will be responsible for the first few episodes of the drama also did an impressive job.

Lee Yeon-hee, Kim Jae-won, Han Joo-wan, Kim Kwang-kyu and the others don't appear in the beginning of the drama but kept their place until the end, showing teamwork.

"Splendid Politics" Kim Jong Hak Productions claimed, "The script reading was intense as we had most of the cast there. We hope to create one of the best historical dramas in history.

Meanwhile, "Splendid Politics" is a historical drama about the passion and jealousy of humans through political powers in the Joseon Times. The drama is due in April after "Shine or Go Crazy".

""Splendid Politics" script reading with Cha Seung-won, Lee Yeon-hee and Lee Sung-min"
by HanCinema is licensed under a Creative Commons Attribution-Share Alike 3.0 Unported License.
Based on a work from this source