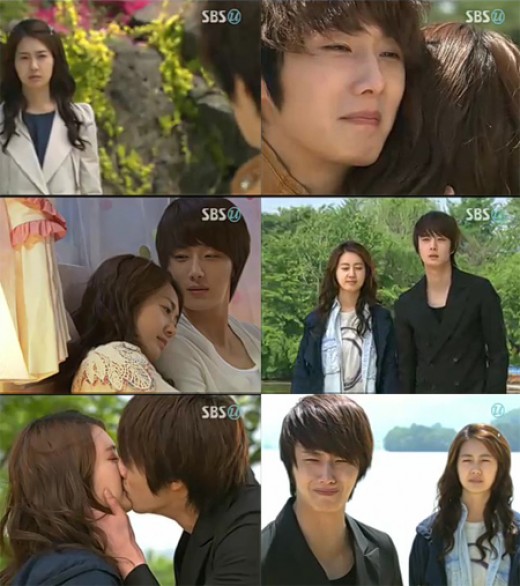 SBS TV drama "49 Days" on the 18th, drew Song Ee-soo who filled 5 years of duty as a scheduler to be able to meet his lover Song Ee-kyeong (Lee Yo-won) again.

Happy that his duties were over, he ran to Song Ee-kyeong and they hugged in a field of flowers and cried their eyes out filled with joy.

Song Ee-soo then took her to where his accident happened and found the ring he had bought to propose to her from between the rocks and put it on her finger.

Not only that, they had a fun time at the amusement park and he re-did her apartment wallpaper for her, then spent late night resting on each others shoulders and talking about things.

However, Song Ee-soo tells and endlessly happy Song Ee-kyeong, "I'm still dead. I wanted to propose to you 5 years ago but now what I want to say has changed".

As Song Ee-kyeong says she will follow him, he says, "I waited 5 years for you to forget me and be happy. You have to let me go to be happy in the next life".

He confessed, "You are the most precious person to me" and displayed the last with an affectionate kiss and kept moving further and further away.

Meanwhile, Kang Min-ho (Bae Soo-bin) who had done evil deeds to Sin Ji-hyeon and her family, cried sorrowfully in front of his mother with Alzheimer.

"[Spoiler] "49 Days" Lee Yo-won and Jung Il-woo, loving reunion"
by HanCinema is licensed under a Creative Commons Attribution-Share Alike 3.0 Unported License.
Based on a work from this source