[Spoiler] "All About My Mom" Lee Sang-woo, mama boy? 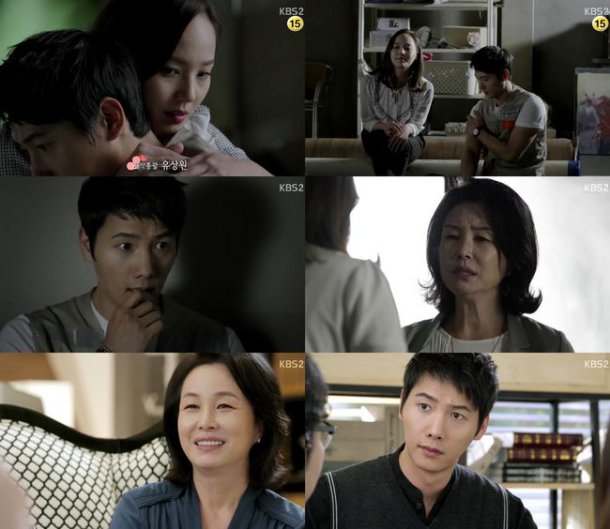 In the beginning of the drama, Kim Mi-sook and Lee Sang-woo were much too close to be seen as a mother and son. They called each other several times a day and Kim Mi-sook checked in on his whereabouts all the time. It made Lee Sang-woo seem like a mama's boy. However, there was a reason why they were so close.

KBS drama "All About My Mom" is the story of a mother San-ok (Go Doo-shim) and Jin-ae (Eugene) who don't get along half the time but think dearly of each other. Jin-ae and Hoon-jae (Lee Sang-woo) were working on Yeong-seon's (Kim Mi-sook) basement. Jin-ae left the work to Hoon-jae and Hoon-jae hid the fact that Yeong-seon was his mother.

However, the basement door got locked and the two were stuck in the basement. Hoon-jae started to change color in his face and broke out a cold sweat. Sensing there was something wrong with him, Jin-ae suggested they thought about fun things but it didn't work. In the end, Hoon-jae held Jin-ae close to him and Jin-ae hugged him back, then soothed him by whistling a song.

Hoon-jae started to speak, "I was kidnapped as a child and was stuck in someone's basement. So this situation reminds me of then". Jin-ae said, "You're mother must have been worried sick".

Yeong-seon and Hoon-jae were close because they were the only ones to rely on each other but they needed each other the most because of the dark past they had. Yeong-seon didn't let Hoon-jae go into the basement and she was always curious where he went.

"[Spoiler] "All About My Mom" Lee Sang-woo, mama boy? "
by HanCinema is licensed under a Creative Commons Attribution-Share Alike 3.0 Unported License.
Based on a work from this source