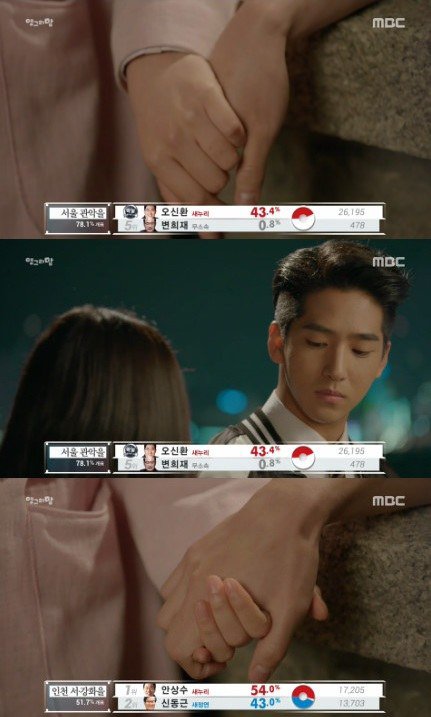 "Angry Mom" Baro and Kim Yoo-jung created such a sweet mood together after they found out their emotions towards each other.

On the April 29th episode of MBC Wednesday & Thursday drama, "Angry Mom", Hong Sang-tae (Baro) saved Oh Ah-ran (Kim Yoo-jung), who was kidnapped, and had a sincere conversation with her.

On this day, Hong Sang-tae found out his father Hong Sang-bok (Park Young-gyu) had kidnapped Oh Ah-ran and told his father, "No, you can't do this to Ah-ran. She's my friend" asking his father to release her. However, he himself ended up being confined in a room.

Hong Sang-tae started the engine of his motorcycle that he was keeping in his room and escaped from his house on his motorcycle. Although he was punched on the face for the rebellious act against his father, he could save Oh Ah-ran successfully.

The two later moved to the Fortress Road and had a sincere conversation there. Oh Ah-ran said she was thankful for saving her as well as not reporting about her mom.

Hong Sang-tae said, "If you're thankful, what can you do for me" and Oh Ah-ran quietly grabbed his hands. Hong Sang-tae put his big hand over Oh Ah-ran's hand again.

"[Spoiler] 'Angry Mom' Baro and Kim Yoo-jung holding hands "
by HanCinema is licensed under a Creative Commons Attribution-Share Alike 3.0 Unported License.
Based on a work from this source