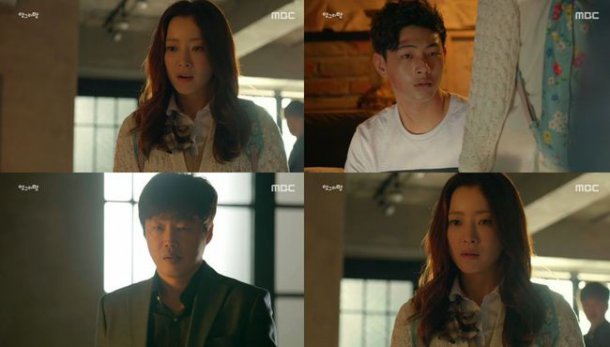 Kim Hee-sun ended up having her true identity revealed to Ji Hyun-woo and Ji Soo.

Kang-ja stepped in the house for Bok-dong, who was injured trying to help her. Kang-ja saw Bok-dong got hurt much. She told her to go to the hospital right away. Bok-dong warned her, "Big brother may come. You should leave quickly".

At the moment, Ahn Dong-chil (Kim Hee-won) and Park No-ah came by one by one and were standing behind Kang-ja. Kang-ja and Dong-chil confronted each other in the highly charged circumstances. Dong-chil said, "Stand back from my younger brother" and Kang-ja said, "Which younger brother. Beom whom you killed? Or Bok-dong here?"

Dong-chil said, "Are you done with your preach, Jo Kang-ja?", which revealed Kang-ja's true identity in front of Bok-dong and No-ah. No-ah asked Kang-ja, "Were you Jo Kang-ja?", of which scene was foretelling that a new phase of the drama was about to come.

"[Spoiler] 'Angry Mom' Ji Hyun-woo and Ji Soo to find out Kim Hee-sun's true identity "
by HanCinema is licensed under a Creative Commons Attribution-Share Alike 3.0 Unported License.
Based on a work from this source