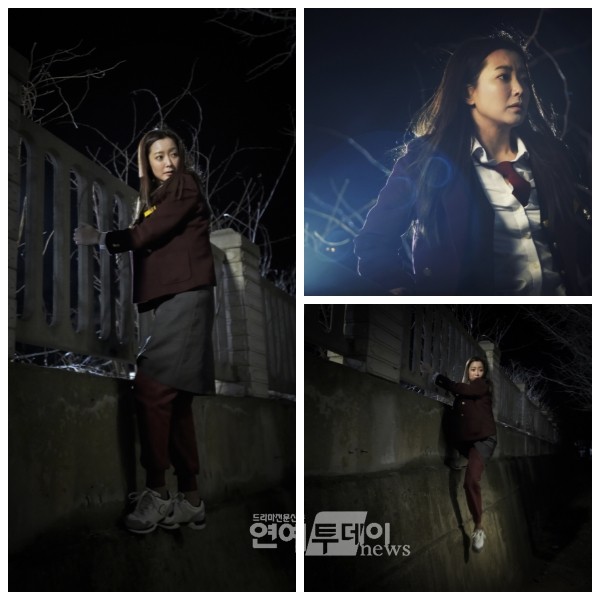 "Angry Mom" actress Kim Hee-sun drew attention with her stunt action climbing a wall while filming the MBC's new Wednesday & Thursday miniseries. Although she is in a school uniform and track pants, the behind-the-scene still looks like a pictorial.

The shooting on the day captured the scene where Cho Gang-ja (Kim Hee-sun) in the past slipped out of her night time self-paced studying block and climbed up the wall to punish a pervert teacher.

Kim Hee-sun as Cho Gang-ja, a punk schoolgirl who had the region under her control, showed off the swift and fast action. Kim Hee-sun presented the enthusiastic action acting performance climbing up the 2 meter wall by herself.

While she had a brief stunt training in advance, she effortlessly jumped up the wall without hesitation and caught attention. As the filming was done segmented in different parts, she had to be standing on top of the wall several times in the cold weather. Under such circumstances, she still showed relaxed smiles and even made her own candies out of her bag available for props. She goofed off saying, "I still cannot give you my favorite flavors though".

"Angry Mom" is a drama depicting a young mom, who used to be a punk schoolgirl, now is back to school as a student again and uncovers the problems of education system in Korea.

"[Spoiler] 'Angry Mom' Kim Hee-sun spotted climbing wall on the set"
by HanCinema is licensed under a Creative Commons Attribution-Share Alike 3.0 Unported License.
Based on a work from this source