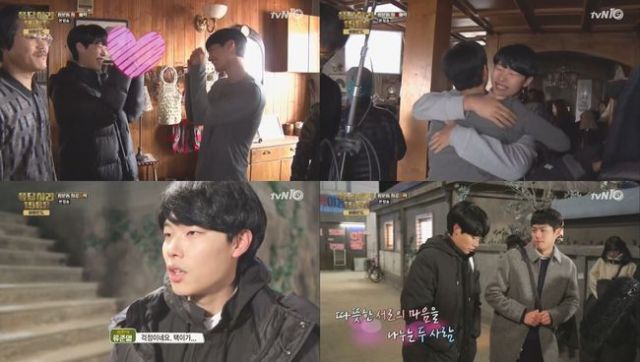 The actors pair, Ryu Jun-yeol and Park Bo-gum of 'Answer Me 1988' is adding more warmth to the drama.

The special program of the drama, which was aired on January 2nd, featured the behind-the-scenes stories.

While Jeong-hwan (Ryu Jun-yeol) was filming a scene sending off Taek (Park Bo-gum), Mi-ran (Ra Mi-ran) told him to give his jacket to Taek because it's cold. He revealed jealously saying "Why, I'm cold too". However, he made a heart sign with his hands towards Taek within a minute as Taek was being cute.

Also, in the scene where Seong-gyoon (Kim Sung-kyun) could get an emergency surgery thanks to Taek and Jeong-hwan appreciated their tight friendship, Jeong-hwan and Taek gave a tight big hug to each other while still sniffing their tears even after the camera stopped rolling.

"[Spoiler] 'Answer Me 1988' Ryu Jun-yeol and Park Bo-gum, actors pair shows off heartwarming chemistry"
by HanCinema is licensed under a Creative Commons Attribution-Share Alike 3.0 Unported License.
Based on a work from this source