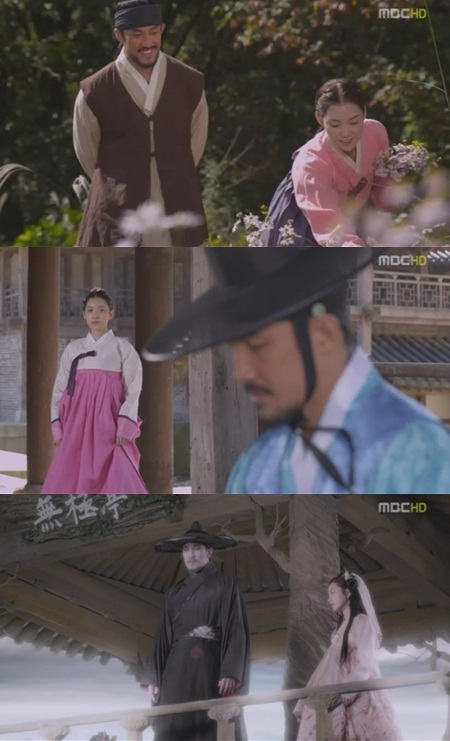 It was shocking to find out that Han Jung-soo and Kang Moon-young from "Arang and the Magistrate" were lovers in the past.

On the seventeenth episode of the MBC drama "Arang and the Magistrate", it showed that Moo-yeng (Han Jung-soo) and Hong-ryeon (Kang Moon-young) had a deep past.

Hong-ryeon couldn't get her hands on a soul so she fell weak and was poisoned in the cave. She then remembered the past as she said, "Living on the dark floors was love for me too. The love I despised once controlled me".

Angel of Death Moo-yeong and fairy Moo-yeon (Lim Ju-eun) were sister and brother in the past life. However, the two of them were lovers in the life before that. Hong-ryeon said, "We longed for each other when we were lovers but we couldn't have happiness together".

She continued, "Our ties were so deep we were reborn as sister and brother in the next life. Even though time and names had changed, I adored my brother". In the current life, they two met as the Angel of Death and a fairy.

Hong-ryeon said to herself, "Even now when he is the Angel of Death and I'm a fairy, I still love him. I didn't like life in the heavens. There's no love there. I asked my brother to go down with me to live as a human again but my brother refused".

Sang-je (Yoo Seung-ho) responded, "That's why you've been in the dark so long that you forgot what you wanted to see in the first place and now there's no love or passion and you're just a strange creature that's what you are".

"[Spoiler] "Arang and the Magistrate" Han Jung-soo and Kang Moon-young were lovers"
by HanCinema is licensed under a Creative Commons Attribution-Share Alike 3.0 Unported License.
Based on a work from this source