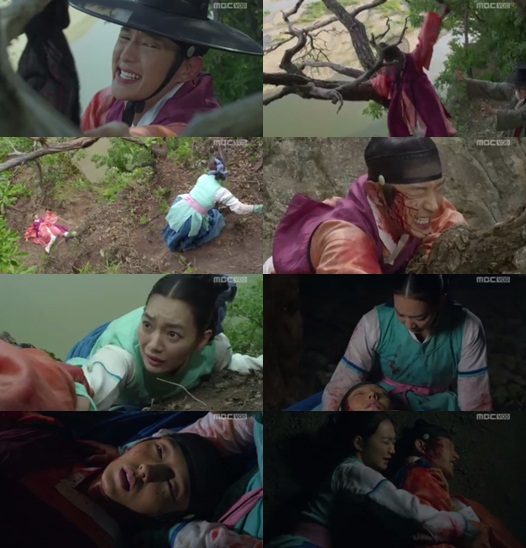 Lee Joon-gi and Shin Min-ah got closer to each other.

On the seventh episode of the MBC drama "Arang and the Magistrate", Eun-oh (Lee Joon-gi) fell from the cliff.

Eun-oh found a valley tomb near the shrine and realized there were strange charms everywhere while looking for any odd signs nearby.

Eun-oh found all the charms and fell off a cliff after getting hold of the last one. As the charms were all taken out the heavens marble shattered and Seo (Kang Moon-young) felt nervous thinking what's coming has come at last.

The Great Jade Emperor (Yoo Seung-ho) said, "He should be tempted now. What we've been hiding so hard has been revealed". Moo-yeong (Han Jung-soo) mumbled, "Moo-nyeong, it can't be you..."in front of the valley grave and increased curiosity about the mysterious character.

Arang almost fell into the water trying to save Eun-oh who fell of a cliff but Eun-oh managed to wake up and save her with all his might.

They avoided the rain in a cave and wait for someone. Eun-oh was badly hurt and in bad condition.

Arang took care of him and hugged him from the back and when Eun-oh was surprised she said, "This'll keep us warm for now. There's nothing to make fire with. I can't take off my clothes for you".

"[Spoiler] "Arang and the Magistrate" Shin Min-ah back hugs Lee Joon-gi"
by HanCinema is licensed under a Creative Commons Attribution-Share Alike 3.0 Unported License.
Based on a work from this source