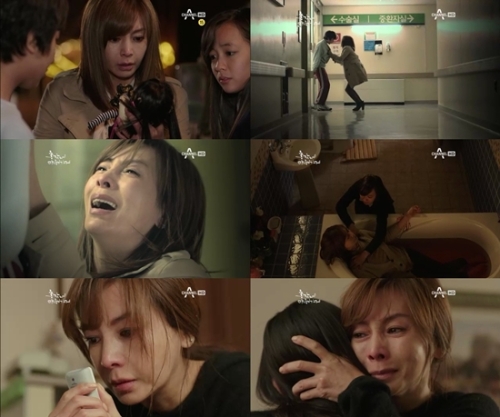 Channel A drama "Bachelor's Vegetable Store" on the 22nd showed Hwang Shin-hye suffering from the pain of having lost her daughter in an accident.

She lost her daughter in an accident and couldn't come out from the shock as she loved her very much.

She thinks her daughter Mok Ga-on (Park So-yeong) is because of Han Tae-yang (Oh Jae-moo). The way she hung on to his clothes and crying sorrowfully moved the viewers.

Choi Kang-seon couldn't stand the pain and decided to do something extreme. However, thanks to Jin Jin-sim (Kim Chae-bin) who happened to visit at that time, she saved her life.

She wants to meet Ga-on's father Mok In-beom (Jeon No-min) without knowing he's dead. Wanting to protect the love, she asked Jin Jin-sim to be her daughter so that she could maintain a good relationship with her husband. Jin-sim wanted to refused but she still accepted the suggestion.

"[Spoiler] "Bachelor's Vegetable Shop" Hwang Shin-hye, a mother who lost her child"
by HanCinema is licensed under a Creative Commons Attribution-Share Alike 3.0 Unported License.
Based on a work from this source