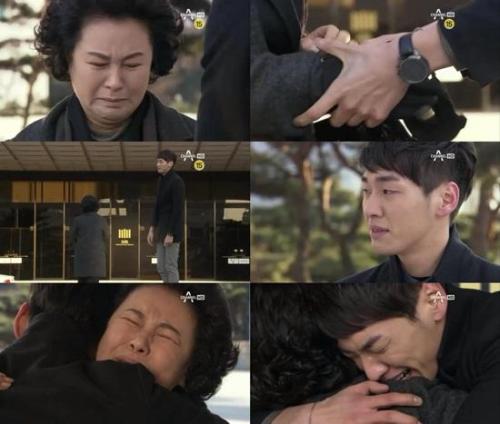 On the episode of the Channel A drama "Bachelor's Vegetable Store", Hwang Soo-ja (Park Won-sook) eventually broke down in tears when saying goodbye to her son Seul-woo (Kim Yeong-gwang), who was going away for a police investigation.

She tried very hard to remain the strong mother in front of her son who was worried about her.

Seul-woo gave her a pair of gloves telling her, "Put these on when you want to hold my hand".

Saying their goodbyes, Seul-woo ran back and grabbed his mother into a hug with tears.

Meanwhile, bachelors' Tae-yang (Ji Chang-wook), Yoo-bong (Lee Kwang-soo), Ki-yeong (Ji Hyeok) and Chan-sol (Sin Won-ho) were at another critical stage of developing their business thanks to criticism from their neighboring stalls.

"[Spoiler] "Bachelor's Vegetable Store" Park Won-sook and Kim Yeong-gwang"
by HanCinema is licensed under a Creative Commons Attribution-Share Alike 3.0 Unported License.
Based on a work from this source