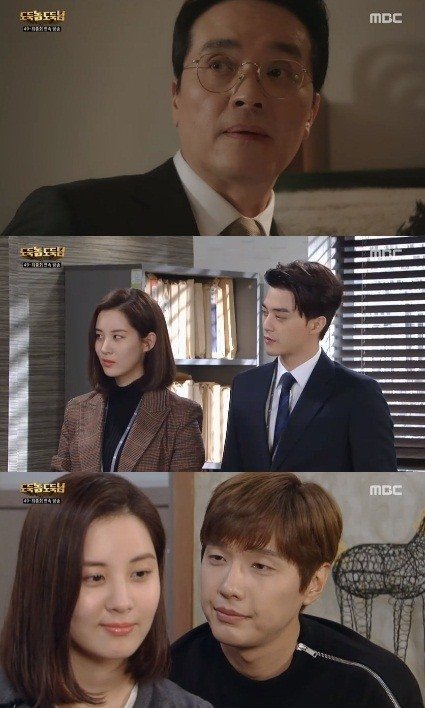 Kang So-joo (Seohyun) had Yoon Joong-tae (Choi Jong-hwan) arrested for murder and murder instigation. She told him, "You are going to be given maximum sentence in court and no one is going to feel sorry for you. No one will come to visit you and you will die old in prison". However, Yoon Joong-tae chose to ignore her words and instead verbally lashed out.

Han Joon-hee (Kim Ji-hoon-I) appeared just then and angrily questioned him. "The person you killed was my mother. She was a much better person than a monster like you".

Kang So-joo and Han Joon-hee told Yoon Hwa-yeong (Lim Joo-eun) about Jang Min-jae. After hearing this, Yoon Hwa-yeong yelled at Han Joon-hee, "Did you get engaged to me so that you could get revenge? This is over!" and threw her ring at him.

"[Spoiler] "Bad Thief, Good Thief" Cheonmun family collapses"
by HanCinema is licensed under a Creative Commons Attribution-Share Alike 3.0 Unported License.
Based on a work from this source