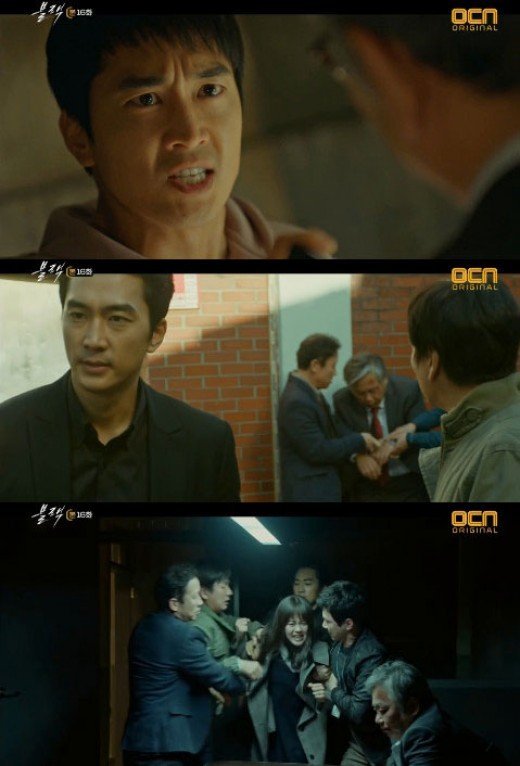 On the latest episode of the OCN drama "Black", Black (Song Seung-heon) pretended to be Han Moo-kang who recvoered his memory and complexly fooled the evil Kim Yeong-seok (Lee Doo-il).

Black decided to finish up the Han Moo-kang case before he left for the sake of Ha-ram (Go Ara). Yeong-seok, a Member of Parliament and presidential candidate, had committed many murders to hide his rape video. Black managed to fool him to thinking he was Han Moo-kang and pretended the video was in his hands. To make the videotape seem real, the rape victim Yoon Soo-hwan (Lee El) reenact the crime and a fellow detective pretended to be the little girl.

However, Black was smarter than Kim Yeong-seok. The act of confessing all of his crimes was broadcast live on camera. In the end, he was arrested for killing so many people, including Ha-ram's father, to cover up his crimes.

Black prepared to leave Ha-ram, but there was yet another twist. Black was looking at a picture of Kim Joon who had died and realized he didn't have the scar Ha-ram mentioned. He guessed someone had switched out the bodies, which would mean that Kim Joon could be alive.

"[Spoiler] "Black" Is Kim Alive?"
by HanCinema is licensed under a Creative Commons Attribution-Share Alike 3.0 Unported License.
Based on a work from this source