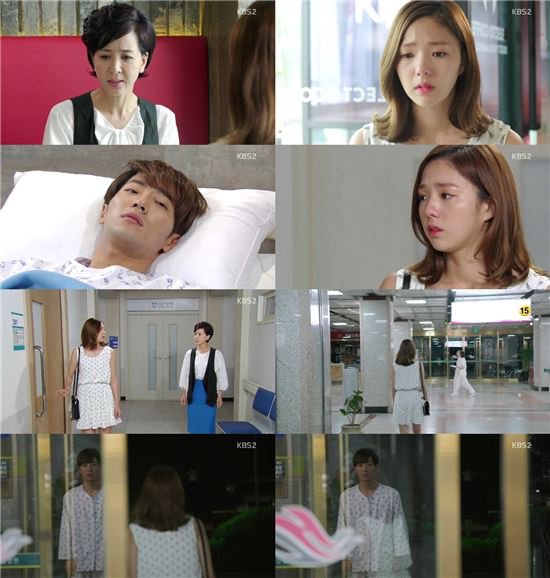 Lee Sang-yeob and Chae Soo-bin are going through a rough time.

In his sickness, Jang Hyeon-do called for Han Eun-soo. Jeong Soo-kyeong heard this and asked Han Eun-soo to drop by the hospital he was in. However, Han Eun-soo refused.

She was upset at the thought of Jang Hyeon-do and in the end went to see him at the hospital. She stood outside his door for a while but turned around to leave after seeing him on the bed.

Jang Hyeon-do tried to follow her but he stopped when he remembered that Han Eun-soo had been cold towards him. Jeong Soo-kyeong ran into Han Eun-soo at the door and Jeong told Hyeon-do that Han had been there.

Hyeon-do followed her. He stopped to get her but he couldn't call her to come back. Han Eun-soo saw him standing there in the mirror and felt sorry but didn't turn back.

"[Spoiler] "Blue Bird Nest" Lee Sang-yeob and Chae Soo-bin"
by HanCinema is licensed under a Creative Commons Attribution-Share Alike 3.0 Unported License.
Based on a work from this source