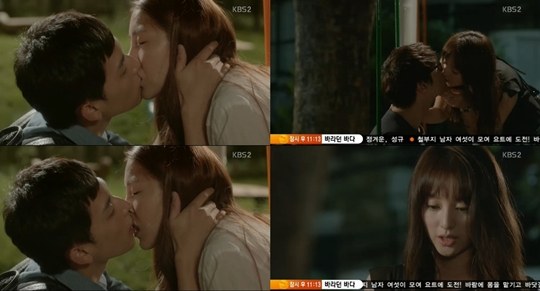 Yeon-ae couldn't look Jin-gook in the face when it was revealed that she was the most obsessive girl in the generation. However, he approached her first and hugged her saying, "Thank you, for being obsessive. Don't worry I obsess about you too" and kissed her.

The kiss of two people who haven't had much experience seemed romantic but a professional one by the other couple was quite different.

Ki-dae was angry with Sae-rom for lying to him and going clubbing with her girlfriends. The 'perfect fox' Sae-rom approached Ki-dae who was sitting on the swings and kissed him. He accepted it.

Sae-rom said, "I felt good to know you were angry. I thought you had no feelings. We've never fought before. Sorry to make you worry. I think it's about time our relationship clears itself".

Sae-rom added, "We need something sure" and suggested going on a trip which was where Jin-gook and Yeon-ae were going as well.

"[Spoiler] BoA and Im Si-wan VS Choi Daniel and Kim Ji-won, difference in kissing"
by HanCinema is licensed under a Creative Commons Attribution-Share Alike 3.0 Unported License.
Based on a work from this source