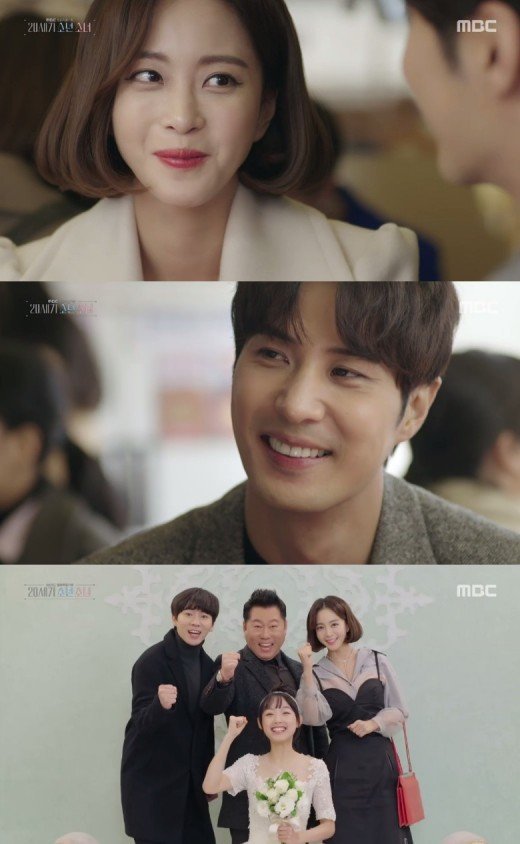 "Boy and Girl From the 20th Century" has ended on a happy note. Nonetheless, is the lowest percentage rating drama in MBC history, but managed not to have its episode count cut.

On the final episode of the MBC drama "Boy and Girl From the 20th Century", Jin-jin (Han Ye-seul) and Ji-won (Kim Ji-suk) were happy together.

Jin-jin and Ji-won's relationship became public, which didn't please Chang-wan (Kim Chang-wan). Min-ho (Shin Won-ho) wanted Ji-won to reconsider while only Mi-kyeong (Kim Mi-kyung) was happy about getting a son-in-law.

Three months later, Ji-won attended a friend's wedding. The bride and groom had met only three months before towhich made Ji-won joke, "We met thirty-five years ago".

Jin-jin caught the bouquet at the wedding and she looked anxious. She said, "The bride is more confident than me and she's twelve years younger. Look at me, I'm so pathetic and I have decision problems". Ji-won comforted her saying, "No, it means you're sincere about things. You can think more".

"Boy and Girl From the 20th Century" ended with Ji-won asking Jin-jin to marry him, which ended her worries as a thirty-five-year-old single lady.

"[Spoiler] "Boy and Girl From the 20th Century" Comes to a Happy End"
by HanCinema is licensed under a Creative Commons Attribution-Share Alike 3.0 Unported License.
Based on a work from this source