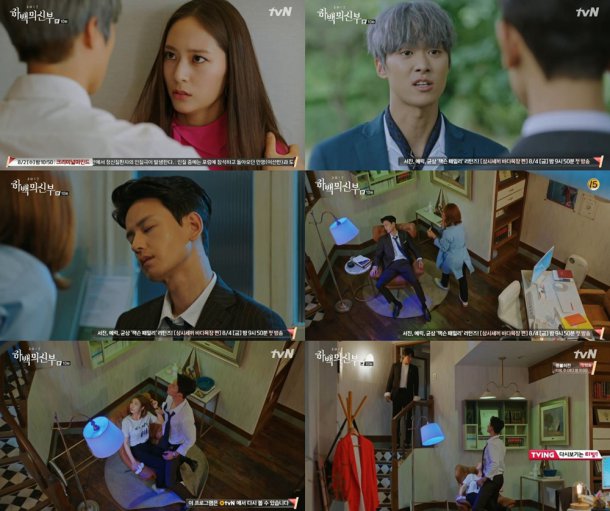 On the latest episode of the tvN drama "Bride of the Water God 2017", Joo Dong (Yang Dong-geun) asked Ha Baek (Nam Joo-hyuk) if the reason he wasn't happy about finding the sacred stone was because he had to say goodbye to So-ah (Shin Se-kyung).

Ha Baek new that So-ah needed 'money'. He helped an old man pull a cart full of recycling items and received 'money' which made him think about So-ah.

Hoo Ye (Lim Ju-hwan) drank alone, despairing over the fact that Bi Ryeom (Gong Myung) called him 'only half human'.

So-ah called Hoo Ye when he didn't come to his appointment and he happened to walk in drunk.

So-ah opened up his shirt as the fever he had wouldn't go down and he tried to attack her because of the branding he had on his chest. However, he calmed down when he realized who she was.

Just then, Ha Baek appeared and saw them in an awkward position and became furious.

"[Spoiler] "Bride of the Water God 2017" Nam Joo-hyuk gets mad seeing Lim Ju-hwan and Shin Se-kyung together"
by HanCinema is licensed under a Creative Commons Attribution-Share Alike 3.0 Unported License.
Based on a work from this source