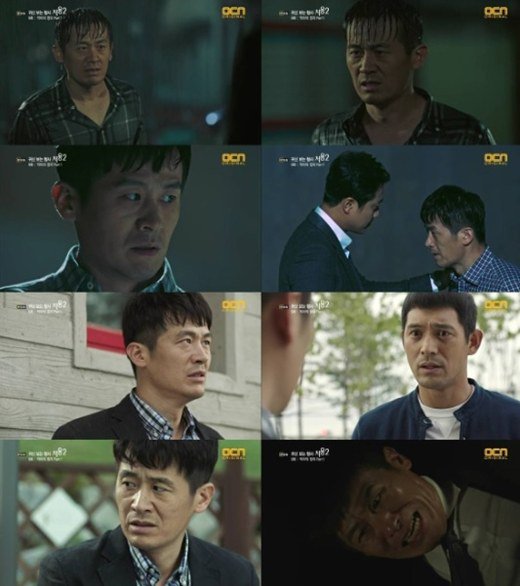 Actor Jung Jin-I took on the role of Kim Yong-cheol, a man who avenges his wife's death in the OCN drama "Cheo Yong: The Paranormal Detective - Season 2".

On the ninth episode of the drama, Kim Yong-cheol tried to take revenge on Dong-seok who was his's wife's killer but hesitated because he was with his daughter. Then Kyu-hyeok appears in front of him and Yong-cheol is furious that he let the murderer free until he is oppressed.

Kyu-hyeok takes Yong-cheol to an execution ground where the families of victims watched the attackers get executed. Kyu-hyeok naturally got Yong-cheol to participate in it and participated himself too, under Seok-chan's (Bae Yoo-ram) lead.

In the second trial held in the execution house, Yong-cheol got to carry out Dong-seok's execution. However, he looked confused when he was handed the switch. Dong-seok yelled for mercy but it was too late.

However, Yong-cheol had pushed a different switch and said, "This is not what I wanted". He asked for the trial to be ceased. Kyu-hyeok agreed but the other family members didn't seem to agree. Kyu-hyeok made Yong-cheol promise to keep everything that happened with him a secret and Yong-cheol left.

Cheo-yong (Oh Ji-ho) found Yong-cheol drunk in street stall but all he said was, "I have nothing to say". Cheo-yong asked, "Where is Lee Dong-seok? Did you kill him already? What will your wife say when she sees what a wreck you've become?"

Ha-yoon (Ha Yeon-joo) said, "Trust me and help him". Yong-cheol strengthened his thoughts and said, "I don't know what you're talking about and I don't want to know". He left to start over. However, he was kidnapped by someone and was shot to death as he was getting away.

Jung Jin-I was a man determined to kill to avenge his wife but ended up being more humane than anyone else.

Meanwhile, Jung Jin-I is currently in the middle of filming "MUSUDAN".

"[Spoiler] "Cheo Yong: The Paranormal Detective - Season 2' Jung Jin-I gets shot to death"
by HanCinema is licensed under a Creative Commons Attribution-Share Alike 3.0 Unported License.
Based on a work from this source