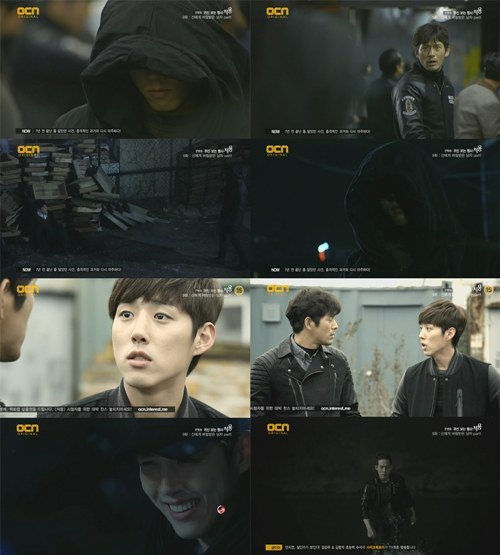 On the ninth episode of the OCN drama "Cheo Yong: The Paranormal Detective", a man in a hood was fighting in the rain.

At the end of the ninth episode, it turned out that the murderer Cheo-yong had been tracking down for 7 years was Jang Dae-seok (Baek Sung-hyun).

Baek Sung-hyun smiled creepily at Cheo-yong when he had fallen down during the fight. He also spread ice-cold fear to around those watching when he came out of the river as if he was possessed by a devil.

Baek Sung-hyun portrayed the perfect character of a murderer with an icy cold voice in the scene where he murdered a man shaking in fear.

He also was a cute little brother in the scene of him and Cheo-yong from the past. With a cute face he said, "I might look like royalty but I'm actually an orphan".

Meanwhile, the final episode of "Cheo Yong: The Paranormal Detective" will be broadcasted on the 6th of April at 11PM.

"[Spoiler] "Cheo Yong: The Paranormal Detective" Baek Sung-hyun appears with a twist"
by HanCinema is licensed under a Creative Commons Attribution-Share Alike 3.0 Unported License.
Based on a work from this source