[Spoiler] "Clean with Passion for Now" Kim Yoo-jung so pitiful 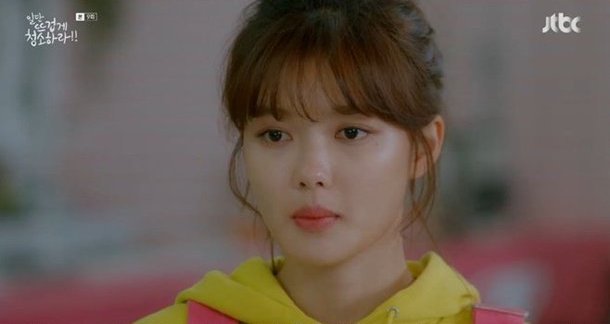 On the latest episode of the JTBC drama "Clean with Passion for Now", Gil Oh-sol (Kim Yoo-jung) was having a bad time at work and at home.

Gil Oh-sol was cleaning a law firm with her colleagues. She did her work as she was told but was framed for losing some important papers. However, Jang Sun-gyeol (Yoon Kyun-sang) argued that they didn't have evidence that she did it.

However, assistant Jun (Yoo Sun) reported that something that could look suspicious had been caught on CCTV. Gil Oh-sol wanted to make thing right and looked for the documents in a recycling center but couldn't and she resigned in guilty conscience.

On top of that, matters wwere worse at home. Gil Oh-dol (Lee Do-hyun), her brother, found their father Gil Gong-tae (Kim Won-hae) being beat up and interfered in the fight but he ended up at the police station. Gil Oh-sol pleaded for favor but the opponent threatened to destroy Gil Oh-dol's life as a Taekwondo athlete.

"[Spoiler] "Clean with Passion for Now" Kim Yoo-jung so pitiful "
by HanCinema is licensed under a Creative Commons Attribution-Share Alike 3.0 Unported License.
Based on a work from this source