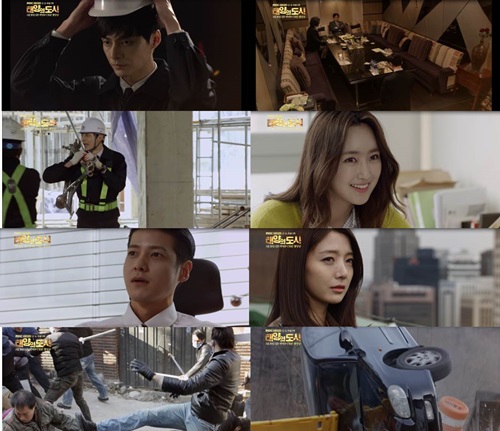 The first episode of "City of the Sun" caught viewers' eyes from the beginning starting with its spectacular and powerful car chasing scenes and the scene where the lead, Kang Tae-yang (Kim Jun) was chased after by mysterious gangsters.

Kang Tae-yang (Kim Jun), a recent college graduate entered a sub-contractor company for Hanguk Construction, which was a top prestigious construction company in Korea. He struggled to adapt himself to the new work place.

He endured everything including the rough culture of the construction workers as well as the corrupted practices in the field. It was because he was determined to reach the top from bottom. However, his rival as well as a longtime lover, Han Ji-soo (Song Chae-yoon) was feeling baffled as someone like him, who graduated from a prominent university as a top student in construction engineering major decided to work for a small sub-contractor company instead of a large general construction company.

Han Ji-soo works for Hanguk Construction and shares a special feeling with So Woo-jin (Jung Min), who is the general manager of the headquarter of the department she works for. He is also a son of the owner of the company.

Although the couple, Kang Tae-yang and Han Ji-soo love each other, they have a different approach for success. Now they have So Woo-jin and So Hye-jin in each one's life. The interest is now focused on how the love relationship among the two guys and two girls will move forward.

MBC Dramanet, special project program, "City of the Sun" is the adaptation of the book 'The Bones of Steel' by author Ikeido Jun, which was also dramatized by NHK previously. The drama depicts the revenge and romance of the protagonist, who lost his father in the middle of the whirlwind of corruption by large construction companies.