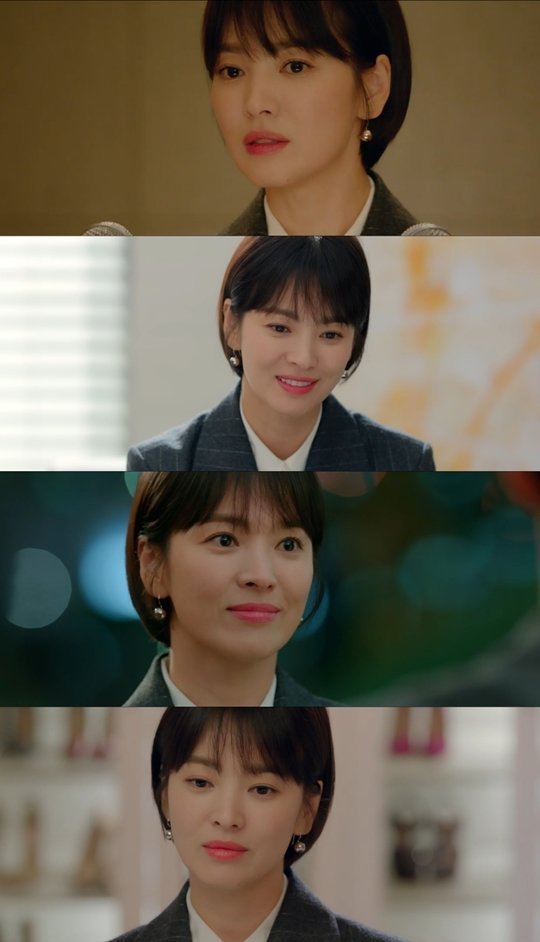 On the latest episode of the tvN drama "Encounter", Song Hye-kyo as Cha Soo-hyeon started laughing with Park Bo-gum as Kim Jin-hyeok.

She felt interested in the carefree young man who seems to be living in a different world than hers. In the process, Song's various charms captured the hearts of viewers. She couldn't help the curiosity she had for Kim Jin-hyeok and looked up his resume. She also wondered who he was talking to on the phone.

When she met him, she smiled without knowing it. She sneaked a look at him, but when he turned to look, she turned her face quickly away.

This is a different side to Cha Soo-hyeon. She's very honest with her feelings and at the same time, she very bold. She picked up a doll for Kim Jin-hyeok and said suggested eating ramyun because it was her dream to do so. She also adjusted the passenger seat for him.

On the other hand, her lack of freedom brought out the bitterness in her life. However, Song Hye-kyo is doing a good job of portraying a woman who is building her curiosity and honesty.

"[Spoiler] "Encounter" Song Hye-kyo Is a Lady Divided"
by HanCinema is licensed under a Creative Commons Attribution-Share Alike 3.0 Unported License.
Based on a work from this source