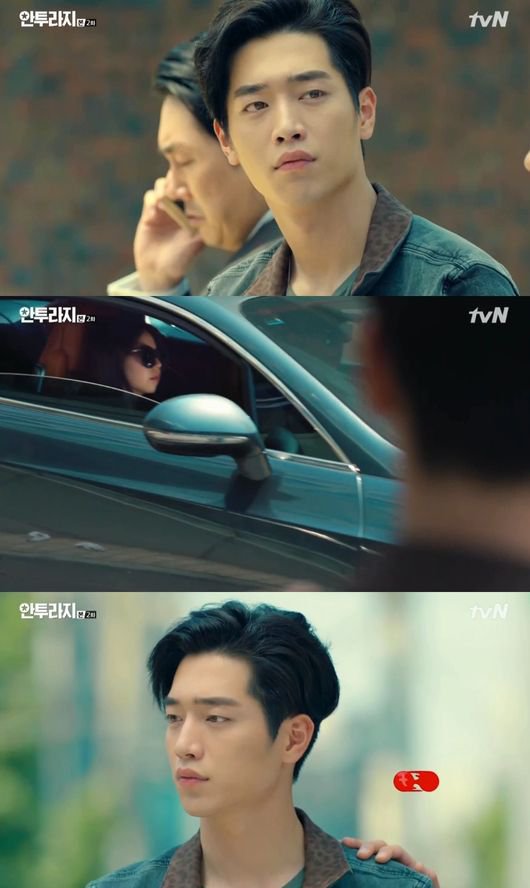 On the second episode of the tvN drama "Entourage", Cha Yeong-bin (Seo Kang-joon) became more famous with the success of his movie "Evil Flower". Kim Eun-gap (Cho Jin-woong), the chairman of the management company offered him a shocking deal and scenario to his next movie.

However, Cha Yeong-bin didn't like the character that he was offered to play.

In the end, he ignored Kim Eun-gap and his calls. There was a party held for the new director of a company who talked to Yeong-bin. "Kim Eun-gap is a pain in the ass. He's so stubborn. Aren't you almost done with him?" and offered Yeong-bin a new contract.

However, Yeong-bin declined and spent some time with Clara. Kim Eun-gap heard what was happening and ran to the party. Then he cornered the new director and said, "Don't you dare approach Yeong-bin again".

He found Yeong-bin and said, "You keep avoiding my calls but you're here at another company party? You shouldn't be hanging out with these cheapskates. I have put a lot of work into you and I'm disappointed in you for the first time. If this is the way you're going to be then I won't stop you".

To calm him down, Yeong-bin said he'd think about the offer again. Then Ahn So-hee (Ahn So-hee) called. Yeong-bin went to her with a doll to show his support for her movie.

Yeong-bin had proposed to her but she'd rejected him. She said she could be in the same movie as him and he agreed to star in it right away.

However, Yeong-bin saw her get into a man's car. The man was Kang Ha-neul who was dating Ahn So-hee.

"[Spoiler] "Entourage" Seo Kang-joon finds out about Ahn So-hee and Kang Ha-neul "
by HanCinema is licensed under a Creative Commons Attribution-Share Alike 3.0 Unported License.
Based on a work from this source