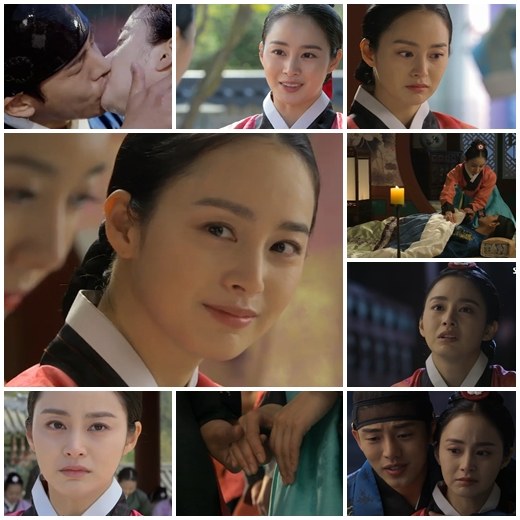 Was this what the viewers wanted from Jang Ok-jeong? Kim Tae-hee's ferocious change from seemingly so weak she might fall at a touch, has never been this welcomed.

This is what the audience wanted. Jang Ok-jeong became fierce and revealed the crime of Seo Ja-kyeong (Ji Yoo) to free herself of a guilty crime.

Jang Ok-jeong saw that the Court Lady Cheon (Jang Young-nam) was passing by when she approached Ja-kyeong and said, "I have been blamed for something I didn't do because of you". Ja-kyeong fell for the trap and said, "Has anyone seen that I have done it?" and Jang Ok-jeong was freed of the blame. Jang Ok-jeong in the previous episodes would have just sat there doing nothing.

This wasn't the end. She didn't refuse the love she got from Sook-jong and lit up the flames to her feelings as well.

She met Sook-jong at night and she hugged him from the back, enjoying the time with him. She accepted Sook-jong's confession saying, "Don't show me your back nor walk away. I will close our gap as a man". She even made him promise never to let go of the hand he was holding.

Jang Ok-jeong and Sook-jong touched each other and became playful even when all of their servants were around them. Sook-jong pretended to tell her something important and just held her hand. She didn't push it away but enjoyed it and smiled back at him.

However, as if jealous of their love, the Queen (Kim Sun-kyung) and In-hyeon (Hong Soo-hyun) got in the way. Sook-jong had been hurt and unconscious while trying to save Jang Ok-jeong and they drove her away from the palace. In-hyeon entered the palace as queen and complicated things even more.

Meanwhile, "Jang Ok-jeong" has sounded the start of a war and what will happen to Jang Ok-jeong and the Queen?

"[Spoiler] Fierce Kim Tae-hee, she's different now"
by HanCinema is licensed under a Creative Commons Attribution-Share Alike 3.0 Unported License.
Based on a work from this source