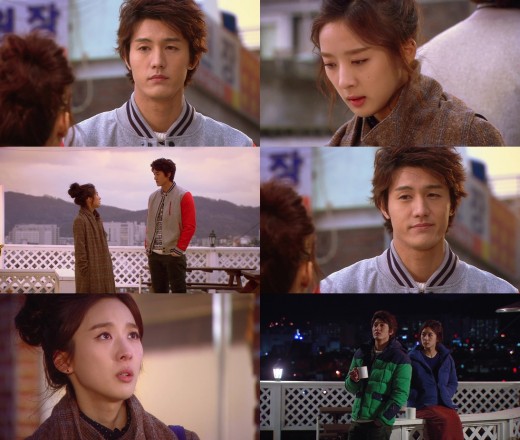 On the eleventh episode of tvN drama "Flower Boy Ramyun Shop", Cha Chi-soo (Jung Il-woo) and Choi Kang-hyeok (Lee Ki-woo) were tense with each other for Yang Eun-bi (Lee Chung-ah).

Cha Chi-soo had dragged Eun-bi out from the theaters while she was on a date with Kang-hyeok and kissed her after staring at her with firey eyes and Kang-hyeok has seen this. However, he pretended he hadn't with the mind of the bigger person.

Not knowing anything Eun-bi told Kang-hyeok, "I think you're trying to play some games with Cha Chi-soo with me in the middle but I can't do that. I'm not a tug-of-war player, I'm a volleyball player so I can't do anytjing but defend or attack".

She continued, "So tell me if I have to defend myself from you or spike you. Don't do anything else and make me confused".

Kang Hyeok replied, "I think you're the one playing games? You kiss Cha Chi-soo on the day you hold hands with me and ride his bike on the day you have dinner with me. Two in a day. You're fit for a volleyball player indeed". She became shy and muttered, "Oh you saw".

Later she asked him why he didn't say anything about it and he said, "Because I wanted to look cool". Eun-bi started opening up to his right and firm ways.

"[Spoiler] "Flower Boy Ramyun Shop" Lee Chung-ah tells Lee Ki-woo to stop playing games"
by HanCinema is licensed under a Creative Commons Attribution-Share Alike 3.0 Unported License.
Based on a work from this source