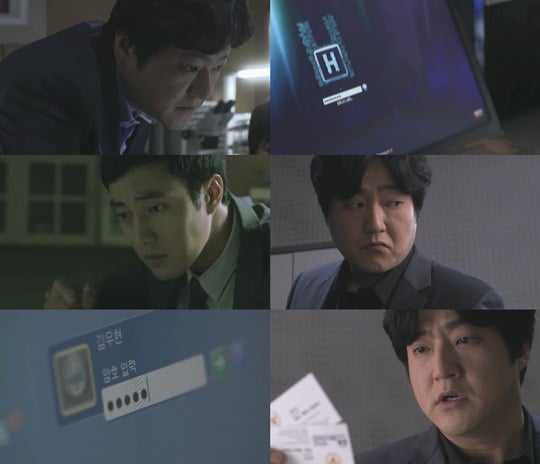 Kwak Do-won found out everything about So Ji-sub with his animal instincts.

On the episode of the SBS drama "Ghost - Drama" on the 13th, Kwon Hyeok-joo (Kwak Do-won) got closer to finding out the truth about Ki-yeong (So Ji-sub) who was living as Kim Woo hyeon.

Previously, Kwon Hyeok-joo thought Ki-yeong who had been burnt from the explosion on the second episode, might be Hades. Then as team manager of the cyber investigations team, he kept suspecting Ki-yeong who was acting differently than before.

While taking care of a case, Hyeon-min (Uhm Ki-joon) said, "He (Ki-yeong) must not be well since he doesn't remember me" to Kwon and seeing that Ki-yeong went towards the evidence storage room, Kwon thought right away that he used Hades' computer that was being kept there.

In addition, a researcher said, "I can't analyze this computer unless I'm Hades and all truth was checked out when the password that Hades used all the time was a matching one to Woo-hyeon's desktop.

In the end, Kwon arrested Ki-yeong and charged him with the murder of Sin Hyo-jeong.

"[Spoiler] "Ghost - Drama" Kwak Do-won discovers So Ji-sub's real identity "
by HanCinema is licensed under a Creative Commons Attribution-Share Alike 3.0 Unported License.
Based on a work from this source