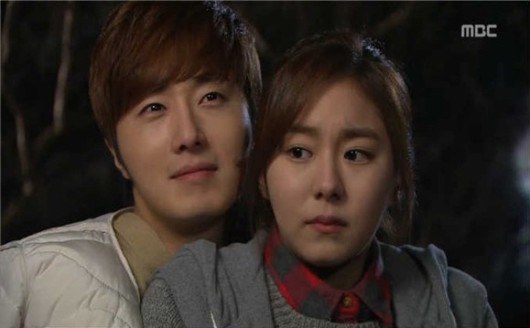 A comical scene was displayed on the 28th as Baek-won (UEE) went to get Do-yeong (Jung Il-woo) who was lost, from the police station after hearing that he was looking for her and drove his car as he was pretending to have lost his memory.

They arrived at the place Do-yeong input into the navigation system which was a small mountain in the middle of the city and he hugged her from the back, saying, "How much closer can we get?"

Baek-won who wasn't very open to Do-yeong felt good in his arms as they looked at the view of the city together.

Han-joo (Kim Sang-joong) and Yeong-hye (Do Ji-won) also added interest to the drama as they cuddled in each others' arms this day.

Meanwhile, "Golden Rainbow" can be seen every Saturday and Sunday at 9:55PM.

"[Spoiler] "Golden Rainbow" Jung Il-woo hugs UEE"
by HanCinema is licensed under a Creative Commons Attribution-Share Alike 3.0 Unported License.
Based on a work from this source