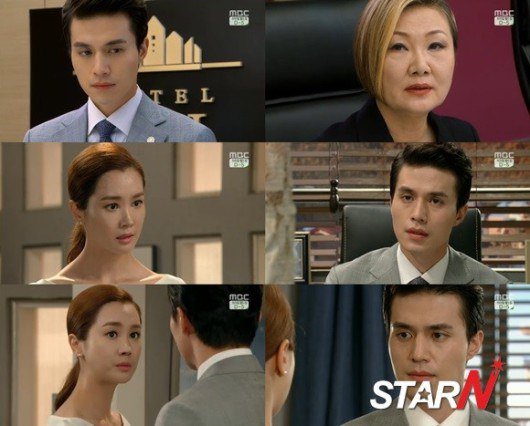 Amone (Lee Da-hae) was hugely disappointed when her fancy concert for rising star Yoo Min-joo, who was the late Ah Seong-won's (Choi Sang-hoon) final plan, failed miserably due to an audio crash.

Cha Jae-won (Lee Dong-wook) investigated the cause and found out that Ah Seong-won had done poor construction to save money and had stolen the rest of the money.

He ordered Cha Soo-wan (Kong Hyun-joo) to not let Amone out of the hotel, but at the same time, Baek Mi-nyeo (Kim Hae-sook) had already started attacking Amone by saying, "The truth is with the late chairman who passed away, so who do we ask to stand responsible?"

Amone only found out later that something had happened and she went to Cha Jae-wan and said, "How are you and Lee Joong-goo (Lee Deok-hwa) different? You should've trusted me. How could you make me a puppet?"

Jae-wan told her, "It's not Joong-goo, it's Baek Mi-nyeo. She installed bugs in every important part of the hotel. Didn't she give you a recorder? It was something I recorded and played in my office. It went straight into her hands".

"[Spoiler] "Hotel King" Lee Da-hae is betrayed"
by HanCinema is licensed under a Creative Commons Attribution-Share Alike 3.0 Unported License.
Based on a work from this source