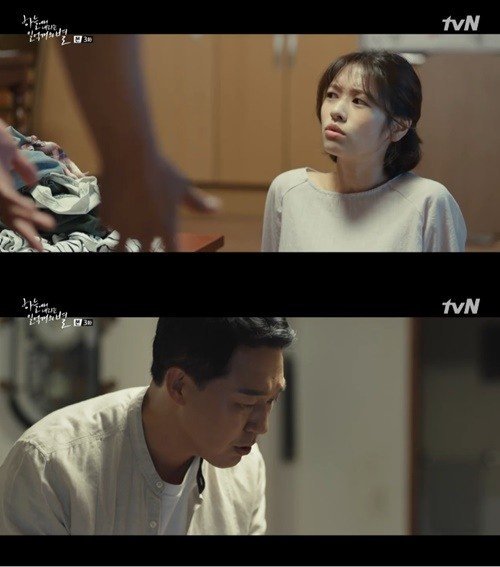 On the latest episode of the tvN drama "Hundred Million Stars from the Sky", Yoo Jin-kang (Jung So-min) was highly aware of Kim Moo-yeong (Seo In-guk).

Yoo Jin-kang was watching the news when she heard that the suspect of a murder case from a few days ago was captured. The person taking the suspect away happened to be Eom Cho-rong (Kwon Soo-hyun). Yoo Jin-kang was glad to see him but also remembered what Kim Moo-yeong said and was conflicted.

As though reading her mind, Kim Moo-yeong had said, "Policework is a steady job, but he's too kind to be loved". Anger surged through Yoo Jin-kang and she said scornfully, "What does he know?"

Yoo Jin-gook (Park Sung-woong) returned home and Yoo Jin-kang tried to show him Cho-rong on TV. She remembered what Kim Moo-yeong said again and Yoo-jin asked, "Are you like that too? Do you ask anyone out even if you have a girlfriend and watch movies with other girls?" Yoo Jin-gook thought she was talking about Cho-rong and asked questions, but Yoo Jin-kang said, "It's someone else, a son of a bitch".

"[Spoiler] "Hundred Million Stars from the Sky" Jung So-min Concerned Over Seo In-guk"
by HanCinema is licensed under a Creative Commons Attribution-Share Alike 3.0 Unported License.
Based on a work from this source