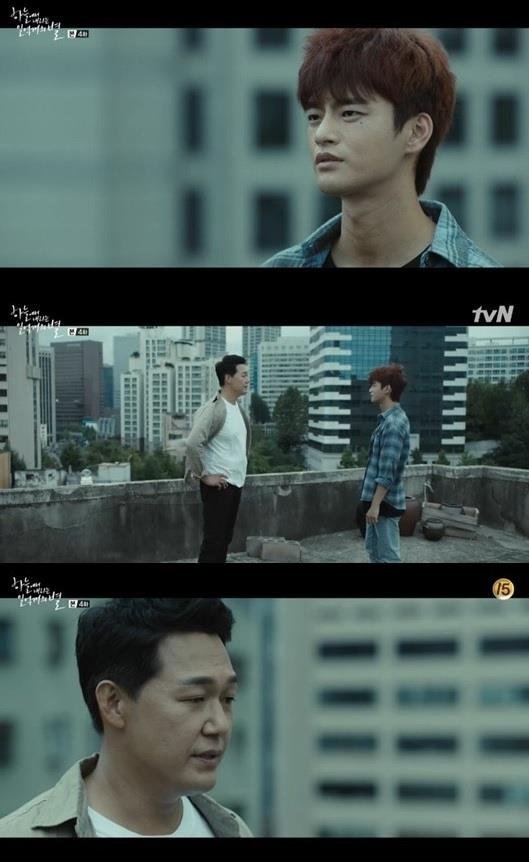 On the latest episode of the tvN drama "Hundred Million Stars from the Sky", Yoo Jin-gook (Park Sung-woong) said Kim Moo-yeong (Seo In-guk) was a suspect.

Yoo Jin-gook asked Kim Moo-yeong, "How does it feel to kill someone?"

Kim Moo-yeong replied, "It's awesome" and Yoo Jin-gook said, "The murderer in the police station, he was looking at you wasn't he? Not Choi Sang-hoon, but you in the mirror". Kim Moo-yeong said, "I want to say 'I did it', but you really should stop watching dramas. I was talking about movies; fantasies".

Yoo Jin-gook wanted to tell him a funny story. "If you had a sail boat, on which side of the angel would you have kept it? My sister had a friend who stitched up a broken bracelet just the way it was before. The female student who was killed collected a lot of snowballs. She fell to the ground when she was killed but someone made the exact replica of her".

Kim Moo-yeong said, "I only fixed her bracelet". He repeated the words, 'angel, Rudolph, snowman and flower'. Yoo Jin-gook said, "You're a suspect from today onwards. I am getting something".

"[Spoiler] "Hundred Million Stars from the Sky" Park Sung-woong Gives Seo In-guk a Warning"
by HanCinema is licensed under a Creative Commons Attribution-Share Alike 3.0 Unported License.
Based on a work from this source