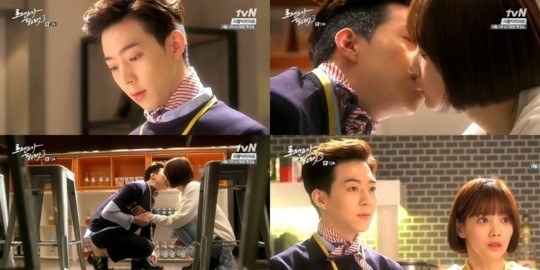 Actor Park Yoo-hwan and Yoon Seung-ah are increasing anticipations for the fourteenth episode of the drama "I Need Romance Season 3".

Lee Woo-yeong (Park Yoo-hwan) discovered Jeong Hee-jae (Yoon Seung-ah) in the staff room not being able to stop her hiccups.

Woo-yeong just bluntly said, "A kiss would stop that" as he was making coffee and Hee-jae thought that was ridiculous when she dropped her cup as she was arranging papers.

Woo-yeong accidentally grabbed her hand to stop her from picking up the pieces and there was an awkward moment between them.

Woo-yeong looked at her lovingly and said, "I'll keep it short" then he kissed her.

On the fourteenth episode will be broadcasted at 9:40PM on the 25th.

"[Spoiler] "I Need Romance Season 3", Yoon Seung-ah and Park Yoo-hwan kiss"
by HanCinema is licensed under a Creative Commons Attribution-Share Alike 3.0 Unported License.
Based on a work from this source