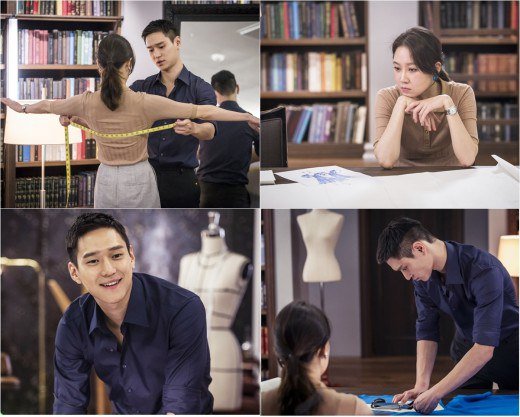 The SBS drama "Incarnation of Jealousy" went overload on sweetness.

Go Kyung-pyo is a third generation plutocrat from a family of fashion lines and he's been sponsoring Gong Hyo-jin with outfits. He's also made an outfit just for her and only her after checking every inch of her body size.

Go Kyung-pyo (Ko Jeong-won) has been longing for Gong Hyo-jin's (Pyo Na-ri) attention with every episode and she has been weakening towards him. On the 15th, they are about to go on a special date.

Go Kyung-pyo has made Gong Hyo-jin Cinderella and he looks at her with love in his eyes. They are at the peak of the relationship.

Apparently there's a reason why Go Kyung-pyo makes an outfit just for Pyo Na-ri. The scene is going to turn out great as he brings out his hidden talent.

Meanwhile, on the episode on the 14th, Pyo Na-ri, Lee Hwa-sin (Jo Jung-suk) and Ko Jeong-won sat around the table together. Lee Hwa-sin told the two they look good together but turned around and looked bitter.

"[Spoiler] "Incarnation of Jealousy" Gong Hyo-jin and Go Kyung-pyo, sweetness overload "
by HanCinema is licensed under a Creative Commons Attribution-Share Alike 3.0 Unported License.
Based on a work from this source