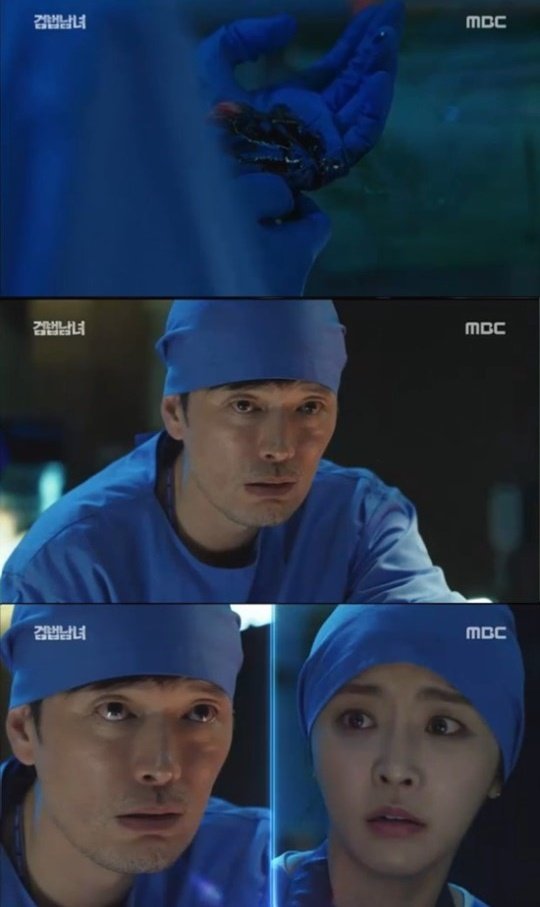 On the latest episode of the MBC drama "Investigation Partners", a body infected with MERS was brought in.

A man felt unwell on his way back from a trip and headed for the airport hospital. He was later found dead next to the toilet. His body was put through autopsy to find out what killed him. Eun Sol (Jung Yoo-mi) took the autopsy video quickly to Baek Beom (Jung Jae-young).

In the meanwhile, there was confusion in the autopsy room. The cause of death could have been MERS with a fatality rate of 40%. The woman who was helping Baek Beom ran away in fear.

Eun Sol went to see Baek Beom and although he told her not to come in, she did. The autopsy room was shut down and Eun Sol had been quarantined.

Despite all that happened, Baek Beom wanted to do the autopsy. Eun Sol tried to stop him but Baek Beom said, "If the cause of death isn't MERS but something else, we might lose the culprit". He asked Eun Sol to take pictures. She was very uncomfortable with the dead body in front of her and cut herself when she staggered. She had been cut by the knife that was used to operate a dead body that might have been infected by MERS.

"[Spoiler] "Investigation Partners" Jung Yoo-mi Dangerously Exposed to MERS "
by HanCinema is licensed under a Creative Commons Attribution-Share Alike 3.0 Unported License.
Based on a work from this source