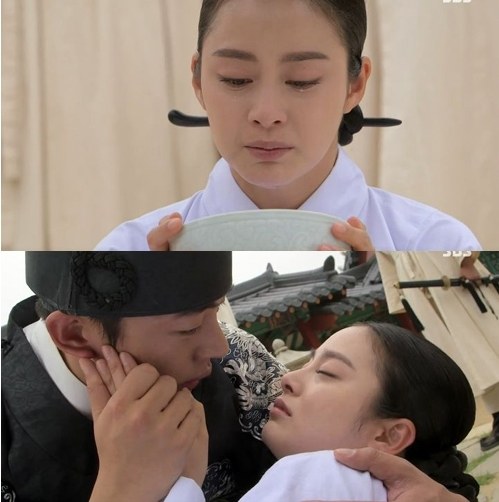 On the final episode of the SBS drama "Jang Ok-jeong" on the 25th, Jang Ok-jeong (Kim Tae-hee) drank poison and met her fate.

Sook-jong (Yoo Ah-in) ordered Jang Ok-jeong to death. Previously, she had said she would die for him.

However, Lee Soon begged Han Chi-soo (Jae Hee) to take Jang Ok-jeong and run away but she refused.

Jang Ok-jeong said, "Send me to the hands of my love. Let me protect my love for him".

Jang Ok-jeong accepted the poison and when she was suffering from it, Lee Soon appeared in front of her and asked why she came back. She answered, "How could I not? I am happy to be in your arms until the end" and died.

"[Spoiler] "Jang Ok-jeong" Kim Tae-hee dies in the arms of Yoo Ah-in"
by HanCinema is licensed under a Creative Commons Attribution-Share Alike 3.0 Unported License.
Based on a work from this source