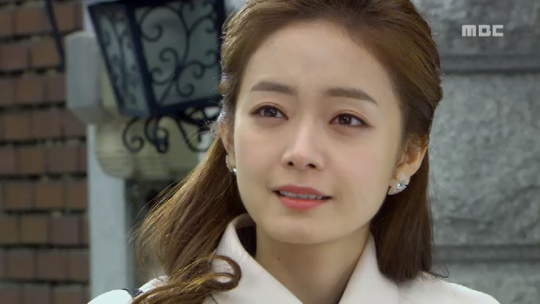 Jeon So-min looks like she's been enchanted with something.

Oh Chang-suk found Jeon So-min wandering in front of his house and took her inside his home thinking she was a reporter. Jeon So-min lied despite of herself.

Previously, Jeon So-min had been bold and headfast in front of his mother and sister but was quiet and still this time. She got to go into his room for an interview.

The bell rang and Jeon So-min was shocked that it might've been the real reporter who had an interview with Oh Chang-suk and ran out of the house.

Meanwhile, this drama can be seen every evening at 7:15PM on MBC.

"[Spoiler] Jeon So-min in "Princess Aurora - Drama" falls for Oh Chang-suk"
by HanCinema is licensed under a Creative Commons Attribution-Share Alike 3.0 Unported License.
Based on a work from this source