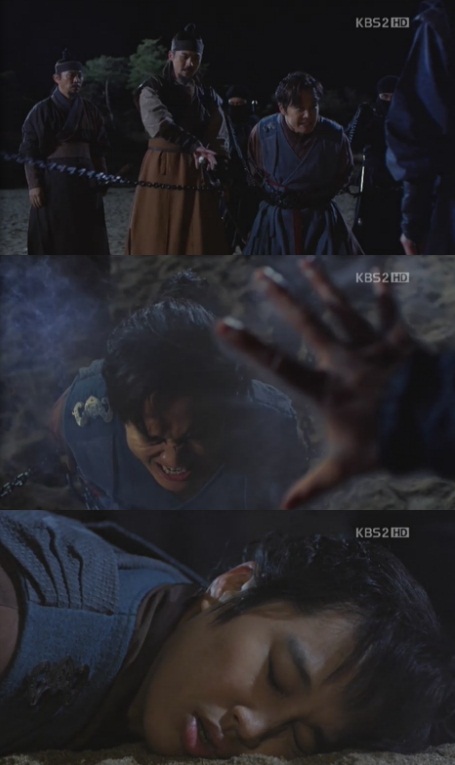 "Jeon Woochi - Drama" Cha Tae-hyun was rid of the magic by Lee Hee-joon and passed out.

On the sixth episode of the KBS 2TV drama "Jeon Woochi - Drama", Jeon Woo-chi (Cha Tae-hyun) and Ma Kang-rim (Lee Hee-joon) moved to a quieter place for their battle.

Jeon Woo-chi mentioned Hong Moo-yeon (UEE) as he said, "I can't leave her up to you". Ma Kang-rim was angry and was going to start using real magic.

Just then, Ma's men surrounded them and Jeon Woo-chi was instantly tied up with chains. He was put on sandy ground and struggled in anger.

Ma Kang-rim said, "I am going to kill you this time" and started doing the magic that Jeon Woo-chi once died from.

Jeon Woo-chi started getting rid of his powers from Ma Kang-rim. Once they were sucked out, Jeon Woo-chi passed out on the sand.

"[Spoiler] "Jeon Woochi - Drama" Cha Tae-hyun is done by Lee Hee-joon"
by HanCinema is licensed under a Creative Commons Attribution-Share Alike 3.0 Unported License.
Based on a work from this source