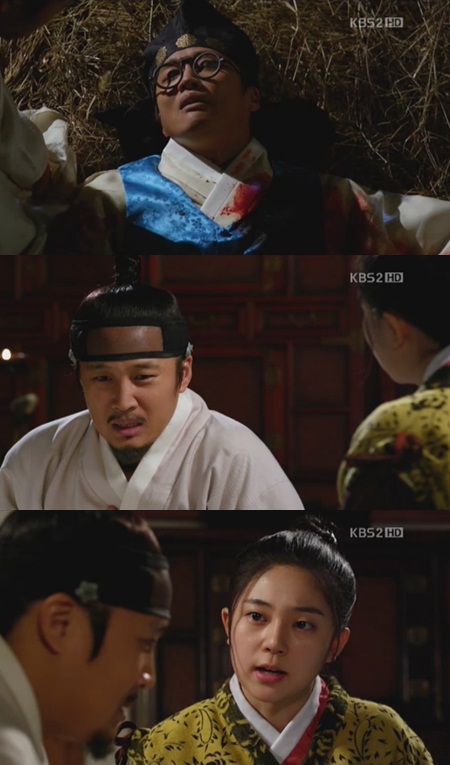 Cha Tae-hyun confessed his identity to Baek Jin-hee on the eighth episode of the KBS 2TV drama "Jeon Woochi - Drama". Jeon Woo-chi (Cha Tae-hyun) told Lee Hye-reyong (Baek Jin-hee) that he wasn't her brother but the master of Yuldo-guk.

Hye-ryeong discovered that Jeon Woo-chi didn't have a burn mark on his right leg and suspected him. Hye-ryeong asked Mak-gae (Kim Roe-ha) to investigate him.

Meanwhile, Jeon Woo-chi tried to detoxicate Hong Moo-hyeon (UEE) from the poison she was given by Ma-sook (Kim Kap-soo). However, news spread that Jeon Woo-chi was trying to spend the night with a pretty woman and Hye-ryeong ran to where he was.

Jeon Woo-chi tried to cure her with his powers but was attacked by Moo-yeon as she was still being controlled by Ma-sook. Jeon Woo-chi heard Hye-ryeong coming and quickly changed into I-chi but Hye-ryeong caught him in the act.

When Jeon Woo-chi woke up Hye-ryeong put a knife to his throat and said, "You are not my brother. Where is he?" Jeon Woo-chi answered, "I am not your brother, I was the master of Yuldo-guk. A man who was a friend betrayed his country and killed everyone. I came to the Chosun to take revenge".

Hye-ryeong asked for the whereabouts of I-chi and Jeon Woo-chi said, "He's dead". The day he arrived in the Chosun, he was chasing Ma-sook and his gang when he ran into I-chi who was at risk of being killed and tried to save him but I-chi saved him instead and died.

However, Hye-ryeong didn't believe him and tried to bring him to the cells.

"[Spoiler] "Jeon Woochi - Drama" Cha Tae-hyun told Baek Jin-hee his secret"
by HanCinema is licensed under a Creative Commons Attribution-Share Alike 3.0 Unported License.
Based on a work from this source