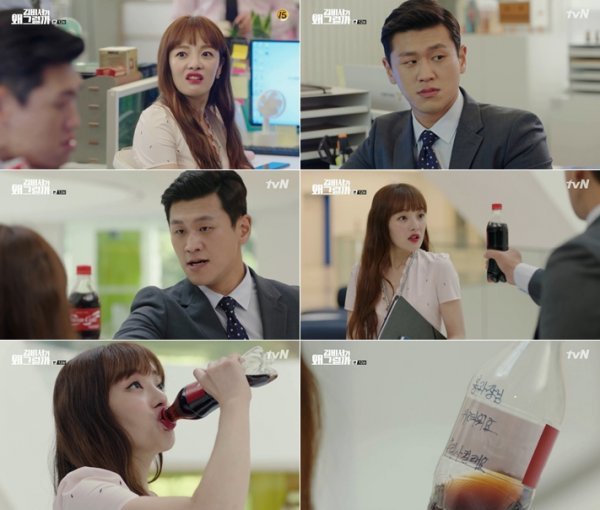 On the latest episode of the tvN drama "What's Wrong With Secretary Kim", Bong Se-ra (Hwang Bo-ra) and Yang Cheol (Kang Hong-suk) finally realized how they felt for each other.

Bong Se-ra was frustrated because she knew Yang Cheol liked her but never asked her out. She even tried to make him jealous, but all he did was smile. When she saw Yang Cheol drinking Coke, she said, "I wish someone would ask me out". Her colleagues wondered why she was being agitated by Yang Cheol and she said, "I like Coke, too".

Yang Cheol handed a bottle of Coke to Se-ra. She pouted and said, "I didn't ask for Coke. I asked for a date". However, there was a message on the Coke bottle and it revealed itself the more she drank. It said, "Ms. Bong you're cute. Do you want to go out with me?" Se-ra was excited and she had to burp.

"[Spoiler] Kang Hong-suk asks Hwang Bo-ra out in "What's Wrong With Secretary Kim""
by HanCinema is licensed under a Creative Commons Attribution-Share Alike 3.0 Unported License.
Based on a work from this source